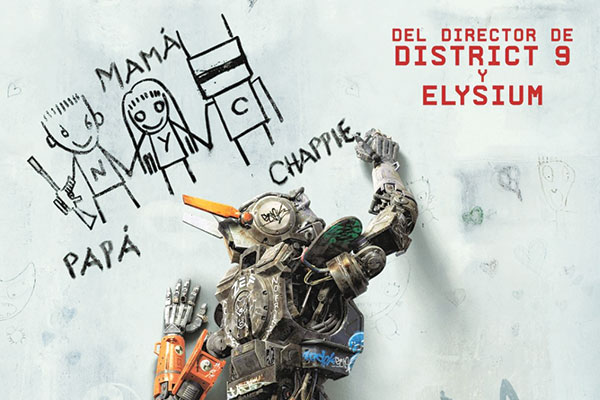 Have you ever heard people say, “there goes [insert minutes, hours, seconds here] of my life that I’ll never get back”?

Deon Wilson (Dev Patel) spent — or wasted, depending on how you want to look at it — the better part of three years creating an artificial intelligence (AI) that could be transferred onto a robot. Following the refusal by his superior, Michelle Bradley (Sigourney Weaver), to utilise the AI that he had created, Deon takes matters into his own hands by stealing a damaged police robot known as droid 22 and saves it from demolition. On his way home, Deon gets kidnapped and threatened with death by Ninja (Watkin Tudor Jones), Yolandi (Yolandi Visser) and Amerika (Jose Pablo Cantillo) after they fail a drug run for their gang leader, a terrifyingly pissed-off man called Hippo (Brandon Auret) who’s on their case.

Hippo and the rest of his gang force Deon to reboot the robot so that they can use it to fight for them. By installing his AI software, Deon manages to reboot the police robot; when the robot awakens, it is with consciousness — and so police robot droid 22 becomes the affectionately named Chappie. What follows is a lacklustre movie with poor casting, subpar acting and a downright atrocious wardrobe.

Set in 2016, Chappie boasts a fashion sense that is closer to post-apocalyptic, and I dearly hope it is a trend that never again sees the light of day. Seriously, what is with Vincent Moore’s (Hugh Jackman) haircut? While the hipster man bun may be “à la mode,” the mullet is definitely not!

The one positive aspect of Chappie is that the film does not follow the stereotypical AI storyline where the creator is eventually overthrown by his/her beloved creation. At the end of the day, Chappie is just deceived into partaking in illegality and, ultimately, his consciousness remains tediously, mind-numbingly “good”.

I would take Bicentennial Man over Neill Blomkamp’s pathetic attempt at a blockbuster any day. At least the acting in Bicentennial Man is convincing and the wardrobe is believable.
This article first appeared in Issue 5, 2015.
Posted 5:43pm Sunday 22nd March 2015 by Maya Dodd.