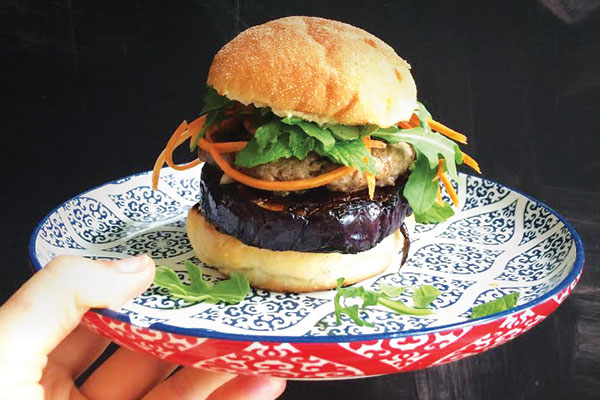 I compensate for my lack of a Victoria’s Secret-worthy bod by seducing men with my charm, wit and culinary efforts. My usual go-to involves spaghetti and meatballs made from scratch, as carbs and meat tend to go down a treat in most males. This time I felt the pasta fest that I usually do wouldn’t cut the mustard and opted to make burgers instead.

A Tinder date once gave me this epic burger cookbook (Burger Gourmet in case you were wondering).

I thought it was a fantastic gift, even though it could be misinterpreted as a subtle “bitch, make me a sandwich” hint. From this book I became inspired to combine together dried fruit and nuts with lamb mince to create a Mediterranean-inspired delight.

McYachty (he likes boats and it rhymes with hottie...) very much appreciated this feast. I think I may even get a call-back audition...

FYI aubergines are in season right now, so enjoy them while the price is right.