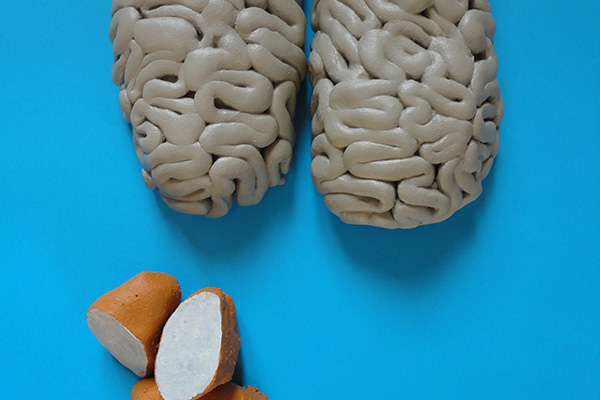 W hen my family was moving house yet again, I remember listening to a conversation between two relocators. They were packing my mother’s various objects, which decorated the numerous shelves in the study. While arranging two strangely bent papier-mâché trout and a found piece of burnt driftwood into a nearly full box of similarly arbitrary objects, one relocator exclaimed, “Look at all this shit!” Mildly entertained and frustrated, I felt defensive of the special objects my mother had collected over her lifetime and that I had played with or made stories for throughout mine. This memory and the thoughts it invokes came to mind once again when encountering Erica von Zon’s “Dogwood Days”.

“Dogwood Days” is tucked between Fiona Connor’s movable painting stands and “Mythos”, a collection of the Dunedin Public Art Gallery’s prints; drifting into it is reminiscent of discovering a forgotten box of your treasured objects or, for me, the hoarded items displayed on my mother’s bookshelves. In her show, Erica von Zon has crafted household items and foods, arranging them along a plywood, rectangular display so that viewers can wander around the works and carefully study each item.

The pieces vary from nearly exact imitations of aqua-coloured breeze blocks (that one expert viewer remarked are barely used now because of their structural inadequacy) and dimpled, cut melons to flattened remakes of meat cuts that almost look like props or cut-outs from a children’s book. The textures of the objects are just as varied — from the pale purple and pink fur of the 1970s “View Street Rug” to the clothes and shoes embedded in wax to look like soaking washing. In the texts accompanying the exhibition, the objects are described as “portraits” of the artist’s family members and inspirations as well as “clues of the immaterial” to be gathered and deciphered by the viewers or “pseudo-archaeologists”. In most cases, van Zon has used traditional craft methods in a new way appropriate for a contemporary art gallery. Her varied responses to the works reflect their varied physical characteristics — as the crafted pile of brown and white bread in the show suggests, “Dogwood Days” is a layered experience.

The questions raised by the colourful objects multiple further because of the deliberate way they are displayed. Because the objects are elevated but close to knee level, wandering around the show’s rectangle platform is similar to exploring a design store, but instead of shopping to then physically consume the objects or acquire them for one’s own home, the viewers are purchasing experiences and memories — of home, of parents, of stories. The everyday of the family home is elevated into the realm of art in a surprisingly pleasant encounter. But the encounter is also filled with interesting tensions — as Martin Patrick observes, the show negotiates a plethora of identities and directly contrasting ideas of art/craft, real/configuration, material/conceptual, and now/then.

After attaining a Master of Fine Arts from the University of Auckland in 2008, van Zon has exhibited around New Zealand and overseas. In 2014 the artist spent eight weeks over July and August in Dunedin working on “Dogwood Days” as a Dunedin Public Art Gallery Visiting Artist. Her final body of work for this show incorporates, as Aaron Kreisler describes, her “continued investigation into ‘domestic’ modernism, culinary fetishism, disposable and popular culture” and also pushes her work into new areas. Her work is smart and researched, but is wonderfully accessible. “Dogwood Days” engages a diverse audience and stimulates stories to be shared between child and parent, two friends or just oneself, making the show a welcome invitation to add to a shared cultural knowledge.
This article first appeared in Issue 3, 2015.
Posted 5:30pm Sunday 8th March 2015 by Loulou Callister-Baker.