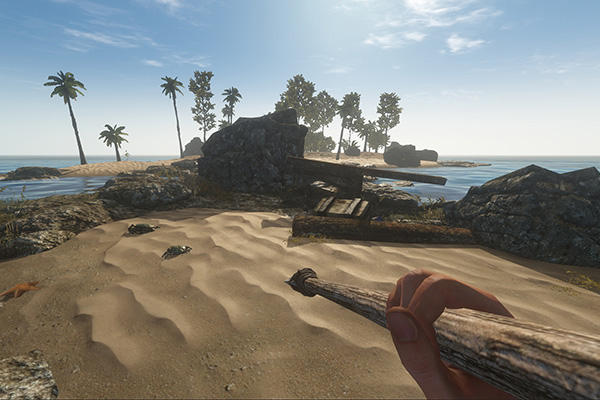 H ave you ever wanted to live out a Tom Hanks, Castaway fantasy on a deserted island with nothing but a netball for company, but couldn’t afford the tickets to nowhere? Then, boy, do I have some good news for you, and you don’t even have to leave your couch to get it.

Stranded Deep is another in a long line of realistic, Castaway-style video games that all seem to start with the player crash-landing somewhere impossibly remote and surrounded by dangerous creatures. In this case, your mortal foes are great white sharks and you have the misfortune of landing amid several sparsely populated tropical islands with nothing but a life raft, water bottle and knife to get yourself to the nearest shore — alive preferably.

From here on, things only get worse as you start to get your bearings. Quickly realising you’re going to need food and water soon, you encounter a serious problem — there’s no McDonalds on this island. All you have to sustain yourself through that anxious first night alone under the stars are crabs and coconuts.

However, all is not lost. You can find salvation in one of the many shipwrecks that dot the seascape above and below the waves, as long as you avoid getting eaten that is. From flare guns to diving equipment, these shipwrecks can contain any number of helpful items to aid in your survival and only really scratch the surface of what is a surprisingly complex and, forgive the pun, “deep” aspect of gameplay. The game also has a fairly simple crafting system, allowing you to create your own crude tools in order to build the things, like a shelter, that you’re going to need if you want to survive long term. This helps to extend the playability of the game and gives you an endgame to aim for, although how you get there is entirely up to you.

Stranded Deep (it’s all in the name) is an open-world survival game that is heavily focused on ocean survival. This is most apparent when you get off your island and into the open ocean, where several species of fish, stingrays, turtles and, of course, the ever-present sharks all realistically interact with one another: bigger sharks chase away the more docile smaller ones so they can stalk your raft as you row from island to island looking for more loot; fish turn and swim away, startled by your presence in their home.

The game is also different to other survival games that tend to focus too much on gunplay and building extravagant fortresses over pure survival. In Stranded Deep there are no zombies to dismember and the only gun in the game fires flares. This game isn’t easy either — your survival is never guaranteed and you have to struggle to build even a simple shack.

This is by no means a perfect game. It is definitely a refreshing twist on a genre that is about as played out as zombie movies were in 2008, but it still feels a bit half-baked in places. The ocean gameplay is great and everything looks very pretty, but once you get into the actual crafting and survival aspects, some pretty big game-breaking bugs start to appear, bugs that can easily ruin several hours of work and made me rage quit the game more than once. It’s also a little light on content — you might get a few hours of entertainment out of fighting sharks and chopping coconuts, but even this gets a little dull after a while. Once you’ve built a house and a motor for your boat, there’s really not that much left to do.

The game has been released to the public early to gauge customer demand and help raise money to continue its development. With any luck, future updates to Stranded Deep will bring in more content. For now, it’s a little too obvious that this game isn’t quite complete.
This article first appeared in Issue 2, 2015.
Posted 6:26pm Sunday 1st March 2015 by Angus Wilson.