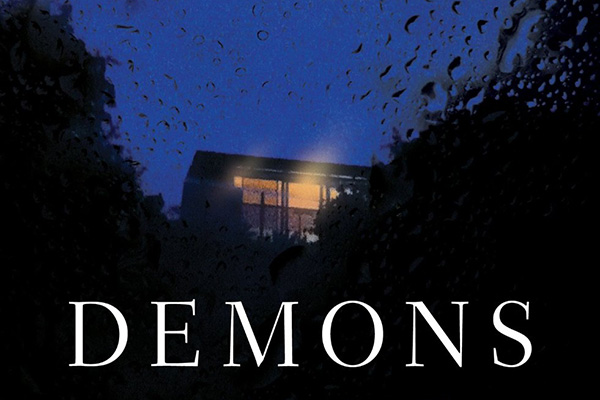 Demons, by Wayne Macauley, tells the story of seven Australians who retreat from the world for a weekend to get drunk and tell each other stories but find, as the weekend goes on, that the experience is becoming a disturbing one. The title and this premise make it sound like Demons might be a horror story, but it’s not. Rather, Demons is social satire that expects readers to feel sympathy for a bunch of white, middle-aged, middle-class, tediously heterosexual people feeling discontented and discussing the state of the world.

Maybe sympathy isn’t the right word, but Macauley definitely seems to expect readers to care about these characters in some way that I don’t. Six of them are introduced at once, with their jobs, a physical description and whichever of the other characters they have their relationship with. It’s neatly done for what it is, but it is a bad idea. I remember exactly one character’s name and physical description. I can’t remember her job or who she was heterosexual with though, because human beings are not actually designed to remember infodumps, no matter how competently executed they may be. That’s the frustrating thing about this novel. It’s well-written and filled with things that could be fascinating, but it ultimately failed to make me care.

A big problem is its themes. One of them seems to be that people are miserable and discontented no matter where they go or how much money they have. Speaking from personal experience, that is not true. Another theme would be that the world is a screwed-up place. Well, and I don’t use this word lightly, duh. I am not denying that people in the position of these characters can be unhappy with society, but their unhappiness does not involve society denying their humanity, so if you are in that latter position it will be very hard to care.

Another theme is attacking capitalism. Critique of capitalism is hardly new since Karl Marx was pointing out capitalism sucked at the same time he was pointing out it existed. And, yes, it is an awful, irredeemable system that kills people on a daily basis, and it’s not even self-sustaining. But instead of trying to offer a viable alternative, Demons just says that Stalin proved there is no alternative, woe is us. I think it’s childish to point out that something blatantly terrible is terrible if you don’t have any ideas for improving it.

One of the stories the characters tell involves a teenage girl who is allergic to everything “artificial”. The story obliquely mentions her having regular sex. You know what is a surprisingly common allergy? Latex. And no, she’s not in a position to be using any other form of birth control, even if you can think of one that doesn’t come under the nebulous category of “artificial”. The fact that this subject is never mentioned is something I am going to blame on a sadly common blind-spot; those without wombs seem almost eager to forget what wombs are capable of.

Although I didn’t hate this novel, I don’t think it tells a story that anyone young and/or disenfranchised can truly appreciate. The themes won’t be meaningful to you unless you are a discontented, white, middle-aged, middle-class, tediously heterosexual person.
This article first appeared in Issue 2, 2015.
Posted 6:26pm Sunday 1st March 2015 by Bridget Vosburgh.