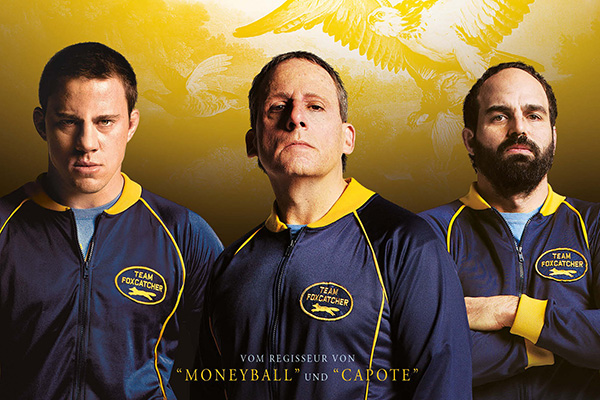 Foxcatcher tells the true story of Olympic wrestlers, Mark Schulz (Channing Tatum) and David Schulz (Mark Ruffalo), and their unsettling benefactor John DuPont (Steve Carrell) as they attempt to repeat their gold medal win from the 1984 Los Angeles Olympics at the 1988 Seoul Olympics.

The film quickly reveals to the audience that Mark appears to be living his life in his older brother’s shadow, a feeling that is exacerbated when he learns that Dave has been offered a coaching position at USA Wrestling. Mark views himself as Dave’s equal but struggles to best his brother in wrestling and in his personal life. Their fortunes change though, when Mark receives an invitation to join the wrestling team of John E. du Pont, a member of the wealthiest family in the United States, a zealous American patriot, and a wrestling fan who dreams of giving the national team the respect he feels it deserves.

Channing Tatum, an actor often typecast as an attractive egghead, brings complexity to the role of Mark Schulz, which allows the audience to experience the protagonist’s frustration. Not only does he witness his brother exceeding him both professionally and personally, the strains that develop between Mark and du Pont also play a major part in his frustration, as he comes to truly know the egotistical and seemingly infantile man.

Steve Carrell’s disturbing performance as du Pont has been lauded by critics and rightfully so - this is Carrell as we have never seen him before. He’s stern, quiet, and strange in a way that is genuinely unsettling; Carrell as du Pont has an almost perverse sense of megalomania as his character’s obsession with Mark, Dave, and the Olympic gold drives them and the audience away from a character who initially appears as a benevolent patriot but quickly morphs into something much darker; this transformation is highlighted by the director’s subtle exploration of the relationship between du Pont and his mother, and an examination of the dangers of money and hubris.

Overall, Foxcatcher is dark, exploratory and troubling; it’s something that would not have been possible without stellar performances from Tatum, Carrell, and Ruffalo and understated yet effective direction from Miller.
This article first appeared in Issue 2, 2015.
Posted 6:26pm Sunday 1st March 2015 by Nick Ainge-Roy.