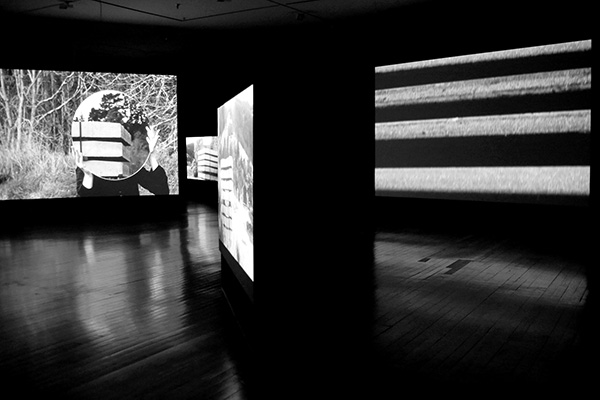 C onfronted by a wall of text that partially blocks Gabriella and Silvana Mangano’s “Visible Structures”, the viewer can experience only a slice of the show from the outside. These glints of colour and light from one of the show’s projected films, mixed with ethereal, overlapping sounds, lure the viewer beyond the first wall into a visual landscape of solid white walls with films flashing and glowing across their surfaces.

Within this new landscape, the viewer is never quite alone with one film. As she faces one of the five walls (none reach the roof of the space) the light and sounds from other screens beckon and interact with each other — surrounding the viewer with a world of repeated and sometimes echoed imagery. By avoiding the use of the four outer walls of the room and, instead, projecting the films on their own walls as objects that stand by themselves and at angles to each other, “Visible Structures” mirrors the works of Fiona Connor, which are exhibited on the same floor. Connor’s works feature paintings by three celebrated New Zealand artists: Colin McCahon, Milan Mrkusich and Toss Woollaston. Each painting has been taken from its “normal” place on a gallery wall and displayed on movable white frames (like those used for portable whiteboards at school). Rejecting tradition, Connor’s works play with and critique the gallery as an institution whose ideas of exhibition formation can seem unchanging. In the Manganos’ works, however, instead of mail addresses and other scrawls marking the paintings’ journeys, the backs of the walls are lit with flashes of the journeys of surrounding films.

On the three smaller walls (one of which has a projection on either side) are films that show parts of a landscape rolling by, often in strange hues of pink or green-blue. Although these films’ contribution to the overall effect of the show is not less important, they are more simplistic, outlines of ideas or “sketches” that manifest themselves more fully in the films shown on the two larger walls. These two larger walls have some of the same imagery featured on the smaller screens spliced with black and white scenes of one of the artists (the collaborating artists are identical twins, which makes it difficult to identify who is performing) interacting with or wandering around an open space that sometimes features towering rock faces or dusty, rocky surfaces. In these glimpses, which are somehow both familiar and otherworldly, the viewer recalls segments of sites seen from the back of a car in between dozing off on summer road trips.

In these two films, the performer carries a large circular mirror, which sometimes reflects a smooth grey colour, almost creating a hole within the work. The held mirror also segments the artist’s body, creating a link to Joan Jonas’ groundbreaking “Mirror Pieces”, which incorporated mirrors into performance works and fragmented the audience’s perception of her art in shows that were almost Surrealist. The use of the mirror creates a second, alternative perspective by reflecting what the artist sees and creating another gaze within the filmer’s. In other shots, the mirror (held off-screen) is used to reflect a circle of light that wanders across different natural surfaces.

The Melbourne-based artists filmed the work for this show during daily expeditions in the Otago region in a six-week residency as part of the Dunedin Public Art Gallery’s Visiting Artist Programme. Perhaps unintentionally, the deliberate ambiguity of the landscapes they chose to film reflects the feelings of students new to Dunedin who are attempting to form connections with the unfamiliar territory that they find themselves in. Experiencing the Manganos’ works is oddly reassuring; although the strange hues and compositions are initially alien, the rhythmic and repetitive patterns of the work calm the viewer. In contrast to the hustle of a new year, especially for students, “Visible Structures” gives us time to watch, listen, experience and wander in an artificial, dreamy reality.
This article first appeared in Issue 2, 2015.
Posted 6:26pm Sunday 1st March 2015 by Loulou Callister-Baker.