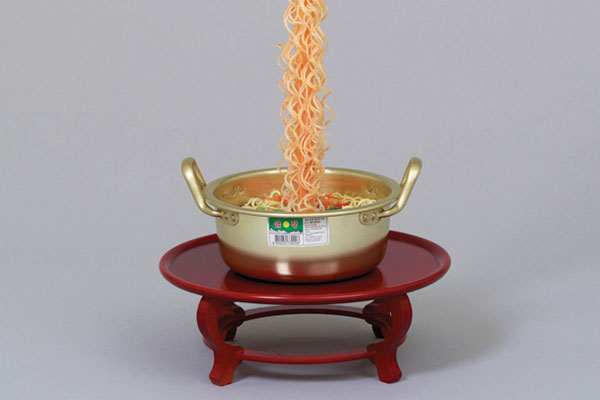 I n a taxi one night in Beijing the taxi driver told me he dreamt of travelling — out of Beijing, around the world — but never could because of a lack of money. The driver explained, speaking slowly in simple Mandarin, that he travelled instead through his passengers and the stories of their lives in worlds beyond China’s capital city. For many, physical travel is something that cannot be a part of their lives, but this doesn’t stop exploration. Just as for the taxi driver, there are so many other ways to be transported and go beyond. One way is through art.

As well as moving the viewer, art is constantly on the move. It’s an exchange; it’s seeing the world and reacting to it. In Beijing I wandered around the white-walled rooms of the UCCA, which were filled with works by contemporary artists based in Los Angeles. This exhibition was an attempt to make specific cultural connections between Los Angeles and Beijing — connections that the UCCA believed were lacking despite their “imagined proximity” as Pacific Rim cities.

Art was on the move again in Caochangdi at the Three Shadows Photography Art Centre (designed and built with the help of prolific Chinese artist Ai Weiwei). A second collaboration, between Amsterdam-based photography institution Foam and China’s He Xiangning Art Museum, was an extensive display of contemporary Dutch photographs. The travelling exhibition, titled Still/Life — Contemporary Dutch Photography, played with the art historical theme of the still life. In one photo by Ingmar Swalue, a plastic cup slowly spilled coffee onto a pile of napkins photographed against a background of black, sky blue, white and nude abstract shapes, reinventing and subverting the still life. This work and others in the show highlighted the sheer cleanness of the digital image — a change from the sole emphasis on pre-production, which is evident in original still life works.

In its loyalty to cultural exchange and strong efforts to reaffirm diplomatic and commercial ties with China, this year Foam will present the work of Chinese artists based in Amsterdam who are working in the field of photography. The excitement in the sharing of art and ideas between Beijingers and foreigners was everywhere I went.

But this exchange is not restricted to cities in the Northern Hemisphere. Exhibitions and performances that I saw in Dunedin last year manifested this global trend and interest in the mobile. Two examples come to mind: the impossibly long and realistic noodles hanging from hovering chopsticks in Korean–New Zealand artist Seung Yul Oh’s MOAMOA at the Dunedin Public Art Gallery; and a cathartic performance in Touch Paste Contact at the Blue Oyster Art Project Space of trauma and identity as a South Korean soldier experienced by the artist Samin Son. Both examples transported Dunedin viewers to “foreign worlds” last year, and I am sure new works will continue to do so this year. With most galleries being a mere 15-minute walk from campus, art couldn’t be more accessible.

Whether you are adjusting to a new hostel, attempting your first university assignment for the year or simply feeling reflective about the distance between you and your family, you can always trust one of the numerous art galleries or spaces in Dunedin to be there for you. Let the DPAG, or the Blue Oyster, or Brett McDowell take you away from these anxieties or bring to your attention details of the reality you are immersed in. Art is a refuge; equally, it is a conversation starter. In fact, I believe good art demands a conversation — it asks questions of you and also makes you ask questions. Why do Seung Yul Oh’s hyper-real bowls of noodles suddenly look haunting rather than humorous? How would I feel if I had to do military service in South Korea like Samin Son? And we also have to imagine what themes and narratives viewers around the world connect with and respond to when they see travelling work from Dunedin artists. As young New Zealanders who aspire to be global citizens, we must look at the art in front of us and learn to interpret it from different contexts — small and large, local and global. We all need to embody the wisdom of the Beijing taxi driver and see art as our “passenger” and our access to a global world.