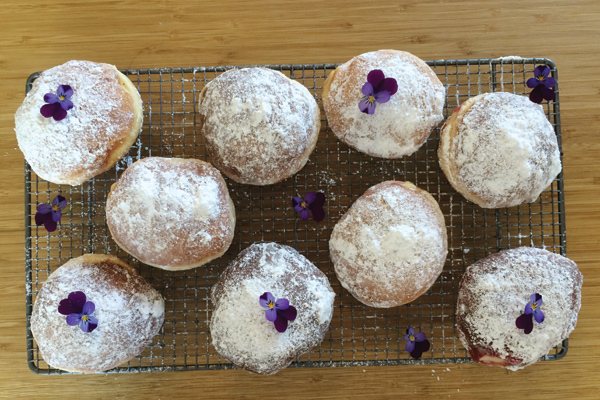 I thought I would go out with a bang for the last food column of the year, or at least a sizzle ... the sizzle of fried doughnuts! Doughnuts filled with custard and raspberries, no less. Boom. I regret to say I simultaneously wooed one boy and broke the heart of another with these very doughnuts. I hoped that receiving such a doughnut would soften the blow of receiving the honest truth. I got bought Velvet Burger once when someone broke up with me (Hi Chris, if you are reading this). Anyway, it is safe to say that these doughnuts are good for smothering any emotion with, whether it be heart break or just feeling damn awesome (holla).

These will require patience, persistence and your Mum’s kitchen mixer. So probably best to leave these until AFTER your exams (even though I am partial to procrastibaking). Plus, then you can raid Mum’s pantry for the extensive ingredient list! Make the components in this order: raspberries, custard, brioche. It took me about four doughnuts to get the temperature of the oil right. It should be 180 degrees, apparently, but I didn’t have a thermometer. I found a quarter turn of the dial worked a treat. If it is too hot the surface will burn before the inside has time to cook.

Adapted from Treats from Little and Friday by Kim Evans

For the brioche dough: