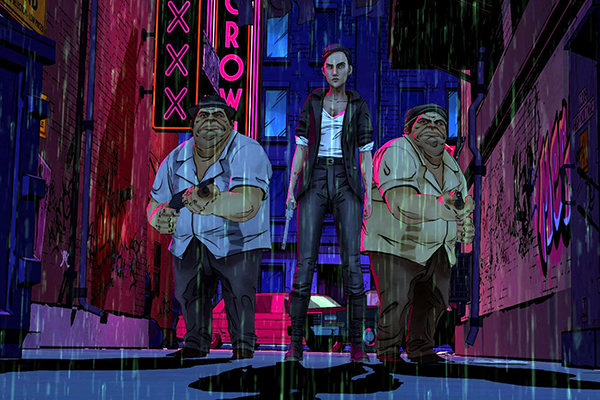 The Wolf Among Us

Since the phenomenal runaway success of Telltale Games’ The Walking Dead from 2012, the gaming world has waited with bated breath to see what Telltale would produce next, and if they could repeat their past successes. The Wolf Among Us was that follow up game, and though it is not quite the revelation that The Walking Dead was, that in no way diminishes the fact that Telltale has once again shown the depth and breadth of storytelling available through the point-and-click adventure genre.

Wolf Among Us is based on a series of graphic novels called Fables. Set in New York City, Fables is about fairy-tale characters that have moved from their realm and seek to live in secret in the human world. Though Fables is about children’s fairy-tale and fantasy characters, it is very mature, communicating its stories of these characters through a gritty, Noir style that highlights the disturbed nature of many of these stories and characters. The Wolf Among Us functions as a prequel to these graphic novels. A wise move from Telltale, as it allows players to jump in without being familiar with this lesser known series. This five-part episodic adventure follows Bigby Wolf, the anthropomorphized version of The Big Bad Wolf, who functions as the Sheriff of all Fables (“Fables” being the name given to fairy-tale characters living in the human world). Throughout the five episodes you play as Bigby as he seeks to solve a series of murders that have been committed against Fables.

As a Noir narrative, you can expect all of the intrigue, suspense and violence that have become synonymous with this genre since the days of Raymond Chandler. However, what you can’t expect is to have the same emotional experience that no doubt many of you had with The Walking Dead. However, before you chalk this up as a failure on Telltales part, it needs to be recognised that this difference in genre is bound to produce difference in experience. For example, though The Wolf Among Us lacks the same depth of pathos, it makes up for it in exhilarating action. Each episode contains at least two or more moments of very clever action sequences. These generally take the form of brutally violent fight scenes. The regularity and quality of these action sequences is very impressive considering that the point-and-click genre is not known for producing games that have action at all, let alone the excellently conceived and executed action that Telltale has produced.

However, as is becoming expected of Telltale, the focus of the game is mostly on character interaction, development and branching decision-making. Throughout the game Bigby meets a diverse cast of varied and interesting fairy-tale characters, such as Snow White, Beauty and the Beast, Georgie Porgie, Ichabod Crane and just about someone from every other fairy tale that you can think of. In fact the lore is so deep that even if you don’t run into a fairy-tale character, the game is overflowing with references, Easter eggs and codex information about almost any character you can think of. Each of these characters are a superbly conceived real world counterpoint to their fairy-tale self, often supporting and subverting facts about their character as is necessary to illustrate the disturbing nature of these stories. For example, Georgie Porgie (who kissed the girls and made them cry) is a sleazy and abusive male chauvinist who runs a strip club.

As you play through the game the dialogue decisions you make not only build out Bigby as a character, but also establish and build relationships with all of these characters. These relationships, positive or negative, directly affect the progression of the story and there are bound to be many moments where you’ll wish that you had been nicer to a character, or perhaps that you’d been much, much meaner.

The Wolf Among Us is an ambitious and tonally divergent next step for Telltale as they build off of their past successes. Though the game does many things well, including their new integration of action, a fascinating cast of characters and an intriguing and eventful Noir narrative, all of these factors suffer from the fact that the game never manages to connect with you emotionally. You’ll no doubt want to keep playing because the game is fun, but there’s little chance that you will want to keep playing because you care, which I think at it’s root is the magic of the point-and-click genre.