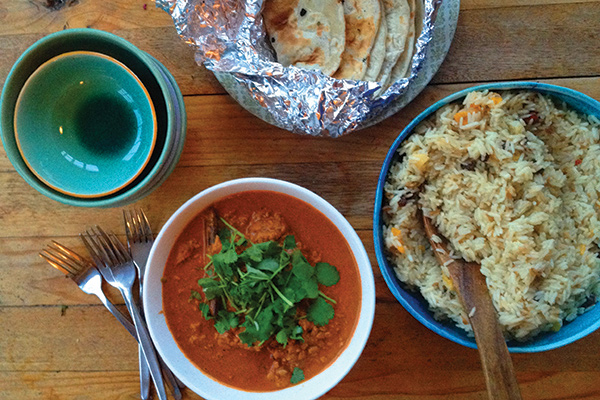 This butter chicken reminds me of a time I cooked for three excellent gentlemen (you know who you are). Prior to this curry’s consumption, the four of us went on an excursion for garlic naan to serve with it. During the half-hour round trip, two of us attempted to drink a Pump bottle of 50/50 gin and soda. I certainly can’t remember actually eating this meal on that particular night, but I think it was a crowd pleaser. I have had this butter chicken since and I can confirm that it is amazing and worth the effort. Make it the day before for optimum excellence in flavour.

This recipe is from one of my all-time most-loved, and most-used, cookbooks, Ripe Recipes by Angela Redfern.

In a large saucepan, sauté the onions in the butter over a medium heat. Add in the cardamon pods, cinnamon stick, cumin seeds, salt and dried fruit and toast for a minute before adding the rice. Cook the rice and stir about the pan for another two minutes. Add the water and bring to a boil. Cover the rice with a lid and leave to simmer for 10 minutes before removing from the heat and leaving to steam itself for another 15 minutes. Fluff the rice up with a fork and toss in the chopped mint leaves before serving

Sprinkle the salt over the grated cucumber and leave to sit for ten minutes. Rinse the cucumber under cold water to remove the salt then squeeze out excess moisture gently with your hands. Mix this cucumber together with the mint leaves and yoghurt. Season with salt and pepper.

Serve everything up along with a good chunk of garlic naan and you are sure to have a winner!! I personally can't wait to make this again.
This article first appeared in Issue 24, 2014.
Posted 3:00pm Sunday 21st September 2014 by Sophie Edmonds.