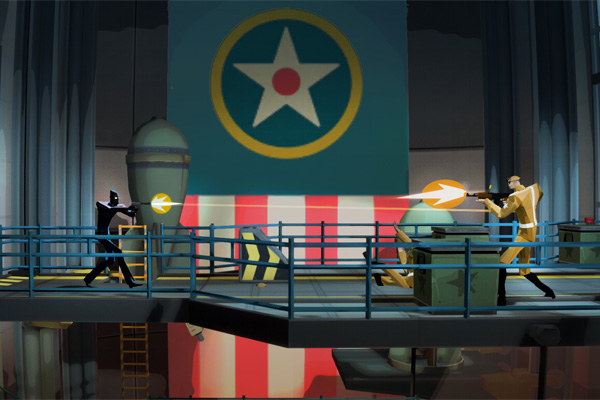 It’s hard for our generation to appreciate how tense the Cold War must have been. Sure, we live in a world with many conflicts, but despite the often horrific and appalling nature of these events, they are all relatively isolated from us. Imagine instead living in constant fear of two of the world’s greatest powers in a persistent stalemate during which both of their fingers hovered over the button, threatening the whole world with nuclear extinction. Dynamighty’s new title CounterSpy deals with this reality, reminding us of the reality of the nuclear threat of a cold war, and the spy warfare involved in keeping those fingers off the button. Fortunately, however, this reality is expressed through a world that makes this reality fun and exciting rather than the hernia-inducing mind fuck that was the actual Cold War.

CounterSpy is a side-scrolling stealth game, which sees you playing spies from both sides of a cold war conflict as they infiltrate enemy bases in search of intelligence and attempts to revert the defcon state of the enemy. Dynamighty is an indie studio comprised of some varied and impressive talent, many of the developers having worked on series such as Uncharted, Infamous and Resistance. However, in my opinion, the real coup d’état for the studio was their acquisition of former Pixar artist Mark Cordell. Cordell gave this game the kind of magic that only a Pixar artist can bring, simultaneously grounding the game in the reality of Cold War-era military structures, but also managing to bring a sense of whimsy and mischief to this very serious location through aesthetic alone. The art style is undoubtedly the game’s strongest element, as it has as much effect on the tone of the game as of the visuals. This is really the magic of Pixar artists because, as with many Pixar movies, the content of CounterSpy could easily be disturbing and dark, but thankfully the gorgeous art and aesthetic actually manages to marry the feeling that the game both pays homage to the concepts of espionage and war while also feeling like just a cheeky bit of fun.

The gameplay itself is a side scrolling stealth game. You must get from one side of the map to the other while taking down enemies, stealing intel, formulas and money and finally reaching the controls of the base where you subvert the nuclear launch protocol. The interesting thing is that you play as the spies on both sides of the conflict, which makes the overarching goal of the game not to destroy the other enemy first but to stop the nuclear launch of both countries altogether.

Though the game is a sidescroller, there is a fantastic cover mechanic that makes the combat far more engaging than any sidescroller I have played before. Upon entering designated cover spots, the camera switches to become a third person shooting mechanic. This makes combat about precision and skill, trying to take down enemies as quickly as possible to either stay in stealth or to stay alive. Though the game labels itself as a stealth game, you are still expected to clean house. This is made clear through not only the design, which does not offer opportunities to proceed without killing the enemy, and also through the score system which is earned through killing but incentivized through larger scores for stealth kills. The wonderful side effect of this cover mechanic is that the change in camera perspective gives a forth wall that is normally missing from sidescrollers. This gives the game a depth and immersion that I didn’t even know I missed until CounterSpy gave it to me.

However, despite all of these strong attributes, many of the elements of CounterSpy are not overly polished, culminating in a general feeling of unevenness. These two concepts were constantly at odds with each other during my time with the title, one part of me absolutely enjoying the experience and the other being perturbed by the weakly conceived or executed aspects, such as the AI or occasional technical or graphical hitches.

All in all, CounterSpy is the kind of experience that is a pleasure to have, but one that will not be long remembered. Though aspects such as the art and combat were excellent, they were often overwhelmed by the unpolished feel of the game, making this a fun experience but, as I said, not a memorable one.