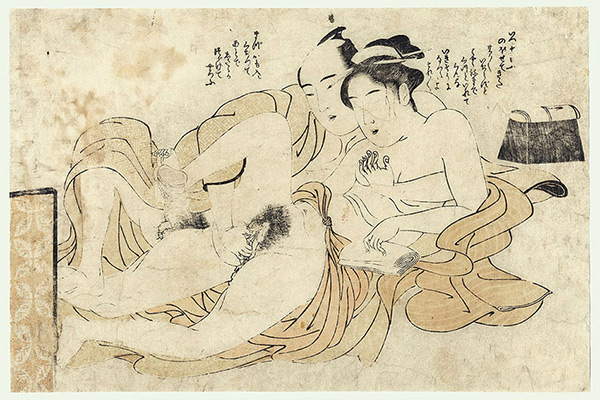 Shunga works express an explicit, but exquisite, world of sexual possibilities in the most idealised and erotisised way possible. And the exhibition of Keisai Eisen’s eleven works at Brett McDowell Gallery is a rare, but exciting, chance to see some of the images that still remain officially prohibited in Japan. Each of the eleven prints are, on average, 240mm x 350mm in size, and show an image of what I would assume medieval soft-core pornography would look like.

Keisai Eisen (1790 – 1848) was a Japanese ukiyo-e artist who specialised in Bijinga (“pictures of beautiful women.”) His best works are considered to be masterpieces of the "decadent" Bunsei Era (1818–1830); the majority of the pieces displayed at the Brett McDowell Gallery were completed during this time. In addition to producing a prolific number of prints, Eisen was also a writer, producing biographies of the 47 Ronin and several books, including a book that documented the lives of the ukiyo-e artists. His supplement is known as "Notes of a Nameless Old Man," where he describes himself as “a dissolute hard-drinker” and claims to have been the “owner of a brothel in Nezu in the 1830s which had burned down.” Perhaps this is where he drew some of his rawly erotic inspiration.

In one image, there is a male lying on top of a female whose genitals are completely exposed – and at a significantly larger size than natural. It is obviously quite pornographic but once you get past the confrontation that comes with images of genital exposure, getting lost in the sophisticated colour patterns, swirling kimonos and silk robes that repeat the curves and undulation of the female’s vagina is inevitable, and, despite the fact that a vagina is literally staring you in the face, the delicacy of detail, the fineness of the ink line, and sensuality of colour palette (subtle shades of red, pink, blue and cream) make the image inherently more tasteful, than what could be otherwise perceived as tacky.

The inclusion of traditional Japanese imagery, such calligraphic symbols and Japanese fans, also enriches the image with cultural references, reminding the viewer of the images’ foreign origin, which were separate from the censored conventions of the Western world.

To the modern viewer, each image gives a similar impression to which Klimt’s earlier nude sketches invoke – there is a similar sense of sensuality and softness that undermines any sense of perversion and purely pornographic perception. The way in which some of these scenes are infused with such a passion, suggests the unimaginable lives of Ukiyo-e artists in Japan during this time.