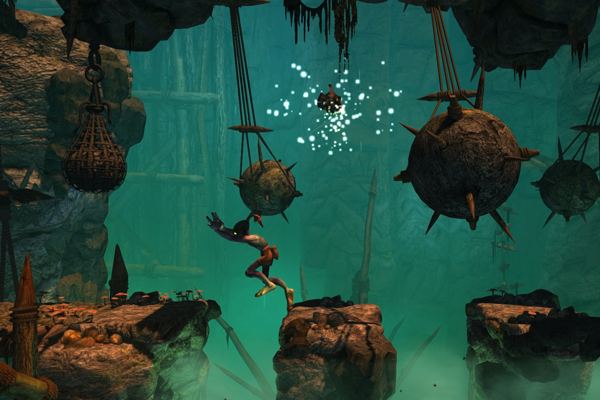 Have you ever finished a book/film/TV series and felt totally devastated by the loss? That feeling of emptiness created when you have become so utterly entranced and involved in a fictional universe that for a time after finishing the series you don’t know how you can function without somehow still being involved in it. I’ve no doubt that this is a sensation familiar to many of you, and certainly one I can empathise with. It is amazing to me how emotionally and psychologically involved I can become with fiction, particularly fiction with a concept and universe complex and interesting enough to require investigation. I remember the first time I ever felt this sensation was at my uncle and aunty’s house, with a PS1 controller in my hand and the face of an adorable alien named Abe on the TV screen. The Oddworld universe became, and remains to be, one of the most fascinating fictional universes I have ever explored, so nothing makes me happier than the first Oddworld game being remade for a new generation of gamers. Oddworld: Abe’s Oddysee – New ‘n’ Tasty is everything I remember and more.

For those not lucky enough to have played an Oddworld game let me illustrate this world to you. Though games in the Oddworld franchise such as Munch’s Oddysee or Stranger’s Wrath have explored other aspects of the world, Oddworld games are mostly engaged with the industrial empire constructed by the Glukons, a megalomaniacal race hell bent on capitalist domination. This goal sees the Glukons taking advantage of all other races, using some such as Scrabs and Paramites as food sources and using more intelligent races such as the Mudokon as slaves. The story of Abe's Oddysee begins with a mudokon named Abe's discovery that due to the Glukons' plummeting sales they have decided to begin a new line of products, using the Mudokons as a food source. Abe, equipped with this information, decides that he must escape and save as many of his Mudokon brothers as he can in the process.

Every aspect of the Oddworld universe is gorgeously stylised, making even the simplest of stories an overwhelming treat to engage with. The story itself is told through Abe’s own narration, and despite the gritty and gruesome thematic and story content, is often hilarious and adorable. The cast of characters are all incredibly unique and interesting, but still somehow familiar and insightful. For example, though the Glukons are hideous monsters with cigars hanging from their mouths, they still encapsulate ideas and concepts very familiar from our own political and corporate world. This is all stunningly realised through an art style and design that is an absolute treat to behold. Each of the creatures are fascinating in their wonderful weirdness and are always highlighted by the intricate and varied backdrops.

The game itself is a side-scrolling platformer with a heavy emphasis on puzzles and problem solving. This makes the challenge of the game two-fold. On one hand your main goal is to help Abe escape, however this is constantly at odds with your desire to save all of Abe’s Mudokon brethren. You will constantly run into situations in which it would be far easier just to run and leave your fellow slaves behind, but your great affection for Abe and the other Mudokons stop you in your tracks, forcing you to think carefully through a situation and how to save as many Mudokons as possible. Sometimes this is in the form of platforming challenges, finding ways to manipulate environments to allow for the safe passage of your stowaways. These sections are always very cleverly designed, however my preferred challenges come from the enemies. These enemies are varied and pose a number of different challenges. There are the Sligs, the machine gun wielding minion of the Glukon. These evil little buggers I like to dispose of in the most gruesome way possible – whether it’s by grenades, grinders or pulling a platform from under their feet, it’s all-good. However, other more primitive threats such as Paramites and Scrabs I try my best not to kill, because just like me they are slaves to the evil Glukon.

I think right there is the key to what makes Oddworld so amazing. My inclination to, without instruction, save some while destroying others demonstrates the depth and complexity of this universe. Only something this well designed would be able to create thought processes and urges this evocative. The Oddworld games created a universe 10-year-old Baz never wanted to leave, and now neither does 22-year-old Baz.
This article first appeared in Issue 19, 2014.
Posted 9:16pm Sunday 10th August 2014 by Baz Macdonald.