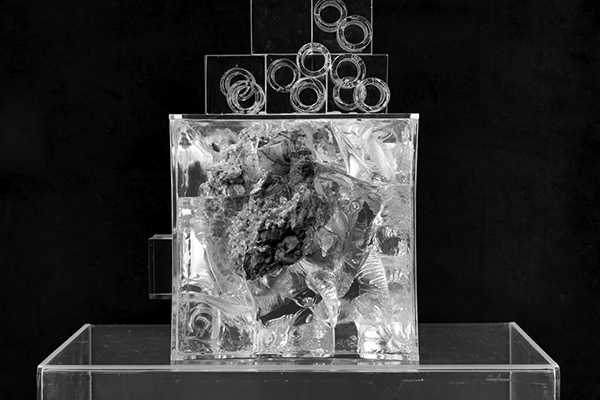 My introduction to Suji Park’s work was serendipity, and I’ve been emotionally involved with her sculptures (and photography) ever since.

I was in my friend’s apartment and he had his recently purchased Park positioned on a table in the corner. Naturally I had assumed that he had just got inspired one night and decided to elaborately embellish a rock – completely naïve to the fact that the object I had spent the past hour getting lost in, was in fact a Suji Park sculpture.

It wasn’t until I picked it up off its perch and waved it round in the air, exclaiming my love for it (in all its cosmic-looking glittery glory), that I was made aware of its actual artistic significance. Shocked and mortified, my friend responded to my intrigue (in hindsight – stupidity): “Hannah, put the $4,000 art work down!”
Suji Park is a contemporary artist, of Korean descent, based in Auckland. Since graduating from the Elam School of Fine Arts at the University of Auckland in 2010, her unique practice has quickly gained notable recognition throughout New Zealand.

Park is repeatedly concerned with nature and form. Her engagement with her work and material takes an approach that involves the “recovery, analysis and reconstitution” of her own material, allowing for her work to naturally progress both thematically and practically.

Anu is Suji Park’s third exhibition at Brett McDowell Gallery, and is a further progression from her previous exhibitions, with the inclusion of disfigured human forms made out of fired-clay and metallic glazing; aluminium powder; pigment; and other reconstituted materials. But, in this exhibition, her characteristically animalistic/figure works are accompanied by simpler, less constructed full vessel forms and abstract pieces.

“Vessel” I, II, III and IV, which, although they appear to look like fired clay, are actually beaten bronze, steel, aluminium and brass, give the deceptively similar effect of fired-clay, displaying Park’s clever and effective creative capability.
Each of the works are arranged in the gallery in a typically Park exhibition manner – spatially separate from one another, standing singularly on varied, in height and colour, plinths, facilitating an uninterrupted, fully immersive visual deconstruction of each of the nine pieces on display.

The first piece in the exhibition is mother of pearl magic; a vessel of white acrylic on fired clay, embellished with clear, clouded quartz crystals standing on a pure white plinth, and it is simply stunning. The piece appropriately sets the viewer up for the progression of the more detailed pieces where Park introduces colour and a wider range of materials, as seen in works such as “Vessel With Eight Rings,” “Yua,” and “Hu,” which are fired-clay constructions, aesthetically enhanced by numerous materials that include graphite, tempera and gold leaf. Also detailed with geometric and pigmented patterns (literally looks like real-life stardust) and finished with metallic glazing, the pieces appear to be a refined amalgamation of her previous, and present ideas.

“Yua” and “Hu” in particular, exemplify the artist’s interest in the regeneration and remaking of work, as each piece displays characteristics of both animal and human forms as seen in previous exhibitions, through the rendering of human faces and animal features, which force and stretch themselves out of various parts of each object – creating an almost disturbing, but nonetheless fascinating result.
“Anu” is my favourite piece in the exhibition. It radically differs from the others in form, material, and construction. It dramatically combines various medias, including fired and unfired clay that is embellished with gold leaf, tempera, garnet, pigment and mica epoxy and is all embedded in a resin, plastic and Perspex cube, with some obscure cylinder shapes arranged and attached to the top. Confusing and characteristically complex, the piece (in my opinion) is the most enigmatic and interesting to observe. It’s like looking into space from a telescope – there are so many areas of colour, texture and structure, in which the more you look, the more you discover.

Each piece seemingly provides refuge from the anxiety and uncertainty of the things we don’t know in the real world; and Park’s exceptionally close attention to detail fosters a sense of nostalgia and wonder, as well as addressing the lingering possibility of something more concrete, such as the satisfying sense of discovery through an inevitably trapped gaze.

On show for another week, this exhibition is not to be missed.
This article first appeared in Issue 15, 2014.
Posted 6:52pm Sunday 13th July 2014 by Hannah Collier.