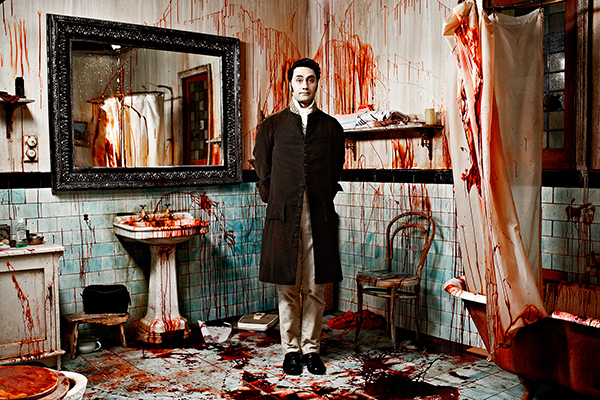 What We Do in the Shadows

It did my heart good to see that Nosferatu hadn’t lost his touch. Vampires have become a staple offering of Hollywood flicks in recent years. I haven’t cared much for the ones that sparkle, the ones that are super-cool and drink blood like they’re shooting heroine, nor for the run-of-the-mill sexy vamp thriller. Luckily, Jemaine Clement and Taika Waititi have seen the tried and tired genre to its logical and hilarious conclusion. Anything that comes after it will (I know, I’m sorry) suck.

What We Do in the Shadows follows the lives of four flatmates in a mock-u-mentary style exposé on the secret lives of vampires. Our primary contact is with Viago (Taika Waititi), who is an 18th-Century dandy and the pedantic-but-loving control freak of the flat. Jemaine Clement plays super-sexy Vladislav (I don’t know how to feel about it either), who was known in the Dark Ages as “The Poker.” Deacon (stand-up comedian Jonathan Brugh) is the young rebel, and, of course, Petyr (Ben Fransham), the 8,000-year-old terror in the basement. As it turns out, Petyr is the vampire in almost every early art work that features vampy apparitions. That’s one of the things that these Kiwi directors did to make this film so fantastic: working images of their cast into a wide array of classical art, giving the whole film an air of seamless credibility. The montages are hilarious and convincing.

Their use of budget was exceptional; the concepts were wildly entertaining and original, while still managing to poke fun at the genre tropes; and the whole affair is indulgently Kiwi. I laughed hard, and so did everyone else. Bloody good time.