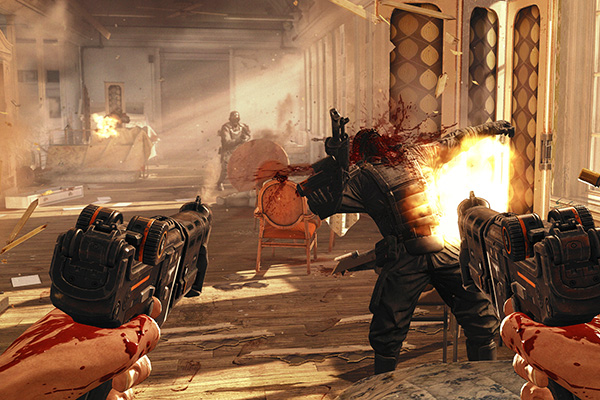 It is strange to think that first person shooters (FPS) are barely 20 years old, especially considering how prevalent they have become. Yet it was only in 1992 that ID Software released the very first FPS, Wolfenstein 3D. Since then, many games have made steps to evolve the genre. Franchises such as Half Life introduced new elements of storytelling, while games such as Portal integrated other forms of gameplay, including problem solving and exploration. With all of this development happening within the genre, it feels fitting that it should be a reboot of Wolfenstein that brings them all together, if only to demonstrate how far the genre has come. Wolfenstein: The New Order is a game that pays homage to its legacy, while also superbly integrating 20 years of development within something comfortably familiar.

Like all Wolfenstein games, players take control of American soldier William “B.J.” Blazkowicz. However, unlike in previous instalments, B.J. is far more than just a grimacing face at the bottom of your screen. For the first time, Machine Games has created not only a substantial character out of our legendary protagonist, but also a fully realised and beautifully stylised world and story around him. The New Order tells an alternate version of history in which the Nazis create technologies that allow them to win World War II. The bulk of The New Order takes place 16 years after the world’s surrender to the Nazis, as B.J. and the resistance fight to take the world back from them. Though the tale of the resistance may be a classic, the rich array of diverse characters, themes and events included into this old narrative structure make it a truly unique and powerful adventure.

Between missions, B.J. returns to the resistance base where you can explore the past and motivations of your fellow resistance fighters. In these sections B.J., and subsequently you, create relationships with many fascinating characters, the most evocative being the romantic relationship you form with Austrian nurse Anya. However, supporting characters such as the mentally disabled Max or the genius but disturbed Tekla offer fascinating conversations as well as insights into how the world under the Nazis is different.

The missions are focused around destroying the new general of the Nazi empire, General Deathshead. Deathshead, as is demonstrated by his name, is a caricature of evil. However, the hideous and atrocious acts that he commits aren’t far from the acts the Nazis actually committed during WWII. From the genocide of the mentally disabled, to human experimentation, Deathshead is a stylised representation of the evil the Nazis encompassed, as well as an illustration of how much worse these acts may have become if the Nazis had gained control.

This goal sees B.J. exploring locations that range from familiar to outrageously awesome. The familiar is represented by the infiltration of Deathshead’s castle, a clear homage to Castle Wolfenstein itself. Other locations include concentration camps, science facilities and Nazi museums. All of these settings, aside from offering different approaches to gunplay, give fascinating insights into this new Nazi order and what their goals and intentions are. The locations grow exponentially more extravagant, culminating in the assault of a Nazi base … on the moon!

The gameplay itself seeks to both pay homage to the gunplay of ID Software’s past, while integrating some of the refined mechanics of today. The result is a first person shooter that is over the top and absurdly powerful, while still requiring some skill and precision. This is emphasised by the different approaches players can approach combat situations from. The first approach is stealth, allowing players to infiltrate areas and brutally take down Nazi soldiers with knifes and silenced weapons. The next approach is precision, using rifles and scoped weapons from cover to tactically take down an alerted group. Finally, there’s the “guns blazing” approach, endorsed by Machine games in the inclusion of dual wielding weapons, which allow you to mow down almost anything in your path. These approaches are supported by an upgrade system, which is unique in the way that upgrades are earned by completing tasks. For example to upgrade the number of throwing knifes you can carry, you simply have to kill a certain number of Nazis with throwing knifes.

Machine Games’ Wolfenstein: The New Order is an all-around surprising game. No one could have expected that anyone but ID Software could create an instalment in this series that maintains the things that gamers loved about the series in the ‘90s, while bringing B.J. into the 21st century with full force. However, though the gameplay is great, I guarantee it will be the story and characters that will have you continuing to think about it for weeks afterwards.
This article first appeared in Issue 14, 2014.
Posted 1:08pm Sunday 6th July 2014 by Baz Macdonald.