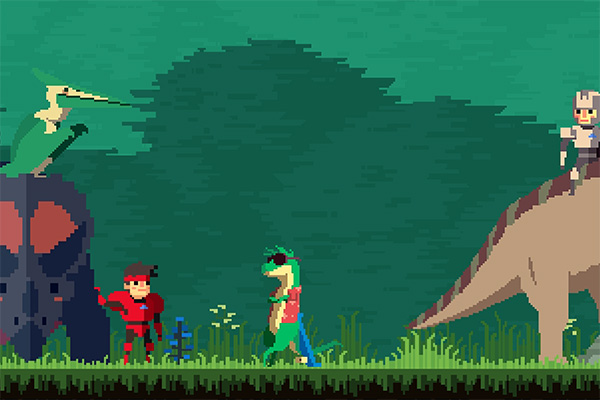 Developed and published by Capybara Games | 360, Xbox One, PC

After five minutes of scrolling through Reddit posts, you’ll be certain that the world’s about to end – what with all the doom and gloom that abounds online. The trolls of the Internet have infected everything with a disgusting degree of cynicism and negativity. Unfortunately, when the post is related to video games this effect is often amplified. There are few trolls worse than the gamer troll. If you were to believe these trolls you would think that all innovation is gone from the world and that every game produced is the same sort of thing that has always, and will always, be done. But avert your eyes from these posts, my friends, because game developers haven’t even begun to scratch the surface of what is possible in video games. Case and point is the latest game from Capybara studios, the talented folks who brought us Superbrothers: Sword and Sworcery EP. Capybara’s latest game Super Time Force is so chock full of innovation that it should be enough to turn any troll into a believer.

Super Time Force, as the title suggests, is about a military group whose objectives are to correct events in the past and future in the hopes of creating the greatest earth possible. The insane and hilarious Colonel Repeatski, the scientist/military mastermind who created the time machine and got your team together, leads you through time and space to do this. The whole game has a charming tongue in cheek humour, which though the dialogue is never particularly well written still gives the game a fun and light-hearted tone. Where the comedy lands is in the game’s design, in which the ridiculousness of the enemies, environments and events exponentially grow as you play. The whole game is realised in a superbly designed retro eight-bit style, with an equally great retro soundtrack to match. The art style gave Capybara license to really mess around with some truly weird and wonderful designs, the likes of which I haven’t seen in games before.

You begin the game with only three different soldiers, all with their own approach to combat and skill sets. However, as the game progresses, you can rescue additional team members, all of which have hilarious names such as Jeff Leppard and a raptor called Zackosaurus.

The game itself is a classic side-scrolling shooter. However, the gameplay rests upon one of the most brilliant and innovative gameplay designs I have seen in a long time. Each level is a race against a clock, not a mechanic I normally enjoy. However, you have the ability to rewind time on a whim, and in doing so add another character to the timeline. The result is kind of like a ghost in a racing game, where you see what you did last time, but then you can support or complete additional tasks with the new character you have added to the timeline. An example of this might be that you spot a secret pathway branching off; you don’t have time to go for it, so you have your character move on ahead towards the end of the level. But you can then rewind time and send a character for the collectible, all while maintaining your progress with the character that moved ahead. The applications for this mechanic are vast, but the most satisfying moments with it is in the boss battles. At first you just have one character fighting these bosses – rewind time a couple of times, however, and suddenly you have an armada of characters destroying the boss in seconds. This is even more satisfying when you are racing the clock, as you have to try and discover the fastest way to destroy the boss to still complete the level within the time limits. Another level of strategy is added to this through the different abilities that each character has, and the fact that if you use the addition of a new character in the timeline to save a character that died, the powers of those two are combined.

So for those of you who think that every mechanic has been used, I invite you to look at the work of Capybara and Super Time Force. Time is a device that has been used extensively in games, but there still are new and innovative ways to implement it. Plus, beyond being an incredibly unique and inventive experience, Super Time Force is a bloody funny and entertaining one.