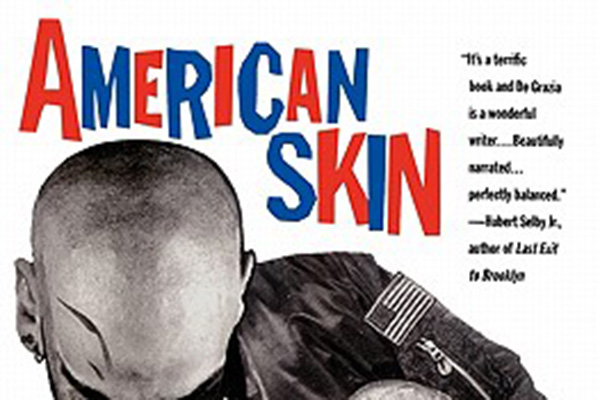 In 1998, Don De Grazia released his critically acclaimed debut novel American Skin. It is described as an American classic and a powerful coming of age novel. The thesis-turned- popular-book process was like a recipe. All De Grazia had was a dash of luck, a cup of talent and 75 dollars to make this delicious book (I’m a bibliophile, I can’t help it). After receiving several rejections, Don De Grazia spent his last seventy-five dollars to make one more submission and the recipe finally paid off.

If I’m being completely honest, I had no idea this book existed until a few months ago. It’s also something I wouldn’t normally pick off the shelf, either. The title screams American Nationalism and the cover features an illustration of a skinhead. In my opinion, skinheads are an acquired taste and a taste that has yet to evolve for myself, but I was pleasantly surprised. American Skin threw me into a world of bomber jackets, Dr Martens and bald gang members sticking it to the man, but I also became enthralled in a story that is so much more than that.

It’s not everyday that you find yourself in a multi-racial skinhead group. Then again, it’s not everyday that you find a gang of multi-racial skinheads. However, in American Skin, this is exactly the case. Set in the late 1980s, 17-year-old Alex Verdi’s life is turned upside down when he discovers the police going through his school locker. Alex then finds out that his parents have been arrested for selling marijuana, his sister has been taken into state care and the police want him for questioning. Unable to return to his family’s farmhouse in Illinois, Alex flees to Chicago where he encounters the local club scene, the skinheads that inhabit this area and the issues that come with the skinhead lifestyle.

Taken under the wing of Tim Penn, the leader of the anti-Nazi skinhead group, Alex Verdi becomes immersed in his new “radical” lifestyle. He shaves his head, falls in love with a skinhead girl named Marie and begins fighting a white supremacist group called the “Swazis.” As everyone is well aware, a town night in Dunedin is nothing without a fist pump, sometimes to the gut and sometimes in the air. The same can be said for Alex as one brawl results in major consequences for himself and Tim. The two of them are forced to join the army and, once discharged, Alex decides to leave his skinhead life for something better while Tim becomes a drug dealer. Alex travels to Evanston, in the hopes of going to university, but his plan goes awry. Although things don’t work out as expected, Alex’s journey uncovers some family secrets and personal revelations are made.

American Skin is a first-person fictional memoir. Alex often seems to be reliving his past experiences with Tim Penn and his gang of skinheads rather than reflecting upon it. Despite this, though, there’s an obvious maturity that Alex seems to have gained when he is able to distance himself from the memories. De Grazia’s straightforward writing style and the quick pace of this novel made me feel as though I was embarking on this journey with him. Sure, if I was him I probably would have gone down to the police station and turned myself in but, hey, that’s why no one has written a novel about me. The different life that Alex Verdi leads is why this book is interesting. As the reader, you’re put in experiences and moments that are uncharacteristic of you, but that’s what makes American Skin a great story and worth the read.