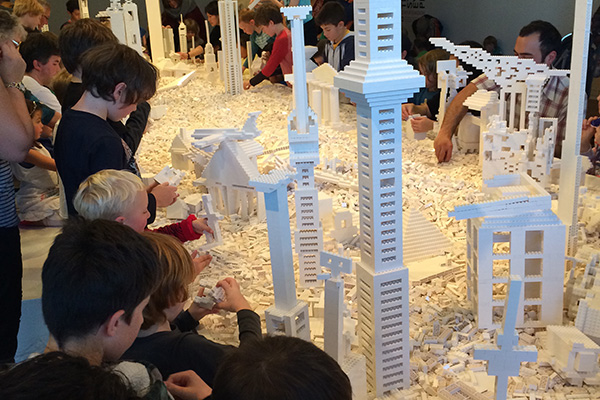 Everything is so much better when you can touch it. I’m really enjoying the participatory installations that have been at the Dunedin Public Art Gallery recently. Playing with Seung Yul Oh’s “Oddooki” (those performance sculptures that rocked, chimed and looked like Angry Birds) was the highlight of my DPAG month in March, and this month it’s Olafur Eliasson’s The Cubic Structural Evolution Project.

Olafur Eliasson was born in Copenhagen, Denmark in 1967 where he studied at the Danish Academy of Art from 1989 to 1995. For many projects Eliasson works collaboratively with specialists in various fields. Among them are the architects Thorsteinn and Sebastian Behmann (both of whom are frequent collaborators), author Svend Age Madsen (The Blind Pavilion), landscape architect Gunther Vogt (The Mediated Motion), architecture theorist Cedric Price, and architect Kjetil Thorsen (Serpentine Gallery Pavilion, 2007).

Eliasson has also engaged internationally in a number of projects in public space, including: the intervention Green river, carried out in various cities between 1998 and 2001; the aforementioned Serpentine Gallery Pavilion with Thorsen, a temporary pavilion that was in London in 2007; and New York City Waterfalls in 2008, which was, indeed, in NYC and involved making honest-to-god waterfalls in different locations city-wide. He also was commissioned for a Louis Vuitton window campaign entitled, “Eye See You,” in 2006, which was a light installation displayed for a short duration in the windows of the 350 Louis Vuitton stores worldwide. He even has a profile on the “Friends of the Haus” section of their website. He’s well established.

In 1995 Olafur established Studio Olafur Eliasson in Berlin, which is a laboratory for spatial research. Today Studio Olafur Eliasson employs a team of architects, engineers, craftsmen, and assistants who work together to conceptualise, test, engineer, and construct installations, sculptures, large-scale projects, and commissions, including The Cubic Structural Evolution Project.

The Cubic Structural Evolution Project consists of 150,000 white Lego pieces on a table, with which the public is meant to create a miniature cityscape.

In the same way that ideas from the audience transform the plastic Lego bricks into “art,” the exhibition itself becomes about the people who actually construct it. Sometimes a person would begin with nothing and, on other occasions, with a partly constructed piece of architecture left by the last participant. From a pile of white plastic mess emerged everything from pixelated looking models of famous architectural monuments (the Eiffel tower was, of course, constructed about five times) to modern skyscrapers, and other weird/futurist looking imaginings. As a whole it presents a complex illustration of how people perceive the urban material of the city.

As much as I wanted to leave some monumental mark on the table, I left most of the constructing to the influx of children – who, surprisingly, seemed to be more architecturally advanced than myself. Building, creating, pushing, moving and tearing down, then reconstructing, the pieces of Lego, their elaborate towers were way cooler than my six-piece contribution! However, as the installation highlights, building a stable society is only possible with the involvement and co-operation of each individual.

It’s a great piece of work and an interesting concept – and it’s all done without any colour. It is well worth going to.