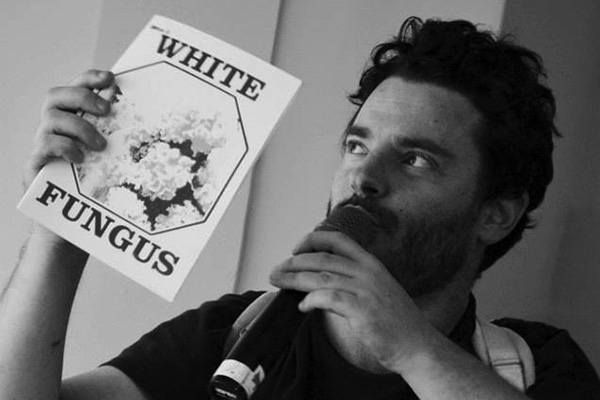 White Fungus magazine began in Wellington as a photocopied publication delivering political messages. Nine years on, brothers Ron and Mark Hanson are still creating their magazine and last year released its 13th issue. Zane Pocock and Loulou Callister-Baker chatted with Ron Hanson over Skype to understand what White Fungus is all about, and how the team maintained enthusiasm and drive for a project that only now is on the verge of an international launch.

Ron: Where are you?

Critic: We’re in the Critic office in Dunedin. Where are you?
No way! Wow! I’m in Taichung in Taiwan. I went to university in Dunedin. I didn’t work for Critic but I had a band that was written about in the magazine.

I have a connection to the city. I like Dunedin – it’s got its own space – it does its own thing. I went to high school in Wellington [and in comparison] I felt like Dunedin was a place where you could do your own thing – it wasn’t caught up in the trends – everyone in Wellington was so much more concerned about being cool. One of the best periods of my life was in Dunedin. That time was a chance to dream. I used to go for walks every night and [think about things].

What about your life now?
Life now is pretty exciting! There’s more pressure than I had back in those days – we’ve been making our magazine White Fungus for nine years but it’s just starting to come together now.

March 2012 was the turning point for us. Our magazine featured in an exhibition at the Museum of Modern Art in New York and in that same month there was an article about White Fungus in the experimental music magazine The Wire. Since then everything has been on a roll. Almost every day there’s some good or exciting news for us! We’re really enjoying ourselves because we’re feeling in control.

How did you maintain enthusiasm for this project for nine years?
We were broke, you know? Before we started we spent four years in Taiwan teaching English. We then had a bit of money to get the magazine going. We also spent years back in New Zealand on the unemployment benefit, we got some grants, we lived with our parents for quite a while. Oh – my mum is calling me! I don’t Skype that often! Ahh bad timing, I just declined her. [Everyone guiltily laughs] ... Anyway, during that time all we had was our magazine. We invested everything into it.

If you turn it into a real business will you stay in Taiwan? What’s the allure of being in Taiwan?
There are a number of reasons. Originally it was because we could make money teaching English here but Taiwan also has really good funding for the arts.

Can you apply for that funding as Kiwis?
We haven’t yet but we’re about to. We’ve done a lot of projects with Taiwanese artists and we can always get funding. We were just in San Francisco and we got funding to fly some San Francisco artists over here. Last year we got funding to fly an artist from Taiwan to New Zealand. Recently we’ve been introduced to someone high up in the Taiwanese government who has suggested we could get funding here.

I don’t know if you know about Taiwan’s political situation but Taiwan isn’t recognised as a country because of the One China policy. When the KMT moved to Taiwan and Mao took over the mainland there were two governments of China. Eventually the West shifted allegiance to Mao and Taiwan got the cold shoulder even though it was becoming a democracy. Because Taiwan doesn’t have all that representation it puts a lot of money into the arts because it wants to get its name out there as much as possible. Taiwan is like New Zealand – it’s an underdog, it’s politically isolated – but there are some really great artists here. We’ve spent so much time here now we feel at home. The magazine’s name White Fungus even comes from a can of white fungus that we discovered in a supermarket here.

When White Fungus was starting out, how did you establish connections in order to constantly have content to fill your magazine?
That’s a good question. In the first issue we didn’t feature any artists, instead we wrote about the bypass being built in Wellington. It was really a political propaganda piece.

It was against Kerry Prendergast, wasn’t it?
That’s right! We’d just come back from Taiwan and we were working on a music project but we were really struggling to find a studio. Then all these artists were kicked out of their studios because of the bypass – including famous artists like the Flight of the Conchords guys. All these people were getting kicked out of their studios and the mayor was still going around saying that “we’re the creative capital” and bragging about Wellington, which was kind of embarrassing, too. The mainstream media didn’t want to cover this story. I wrote an article for one of Wellington’s community newspapers and they edited the hell out of it, so by the time it was published it was totally different to what I had written. In the end we decided to write about what it is they’re destroying to build this motorway. We wanted to make a publication about the history of this area – about Cuba Street. Because we wrote about issues that people cared about, our publication instantly got traction. After that we followed the responses. At first, some of the artists we wrote about we had met through art galleries. But at the beginning we had no contacts except the people we’d gotten drunk with at the pub. It involves trial and error and not being afraid to be rejected or not get any response at all.

Do you have any bad or good rejection stories?
Not so much! You get ignored more than you get rejected. One time a bookstore sent back a copy of the magazine with its business card that said “No. We do not want this.” I won’t name the store because it’s now stocking us. There’s no point in cutting off your nose to spite your face!

Generally, we’d be ignored and underestimated. In the past, people would see our photocopied magazine and never see that it could grow into something. People only see something for what it is – they very rarely see a vehicle or a person and see the potential for what he or she or the project could become. Every time we made a new issue people would be shocked. But a lot of people preferred it when our magazine was simply a photocopied work because it was less threatening, I guess. But we were ambitious. We wanted to cause a stir and eventually live off what we did.

Very few people have the courage to cold call but if you do that you will have some successes. But I’ve always felt like when we didn’t get a success or a response, that was for the better anyway. They’re not the sort of people we want to talk to. You’ve got to be open otherwise you go backwards.

What barriers have you faced over time?
Despite the obvious money barriers, the biggest barrier we encountered was a kind of defeatism. People would tell us, “You can’t do a magazine,” like it was an established fact. Do you know that magazine Pavement? Back in the ‘90s, Pavement was huge but it went broke and closed down. There was a magazine called Staple, which closed down, and then there was a magazine called Loop, which turned into a record label and the magazine closed down ... This made everyone think that we couldn’t do a magazine in New Zealand because New Zealand is too small. Also, New Zealanders are often suspicious of ambitious people. It was a hard road – there was very little comprehension or enthusiasm. But when things do start going well, people can turn on you even harder because they don’t want to be proven wrong. But we were operating on a whole different model and we weren’t just dealing with New Zealand – if we were only making a magazine for New Zealand, it would be a lot harder.

I’d like to challenge the sense of defeatism in New Zealand. I want young people to know that just because no one seems to get what they’re doing, they should continue to do it anyway. If you’re determined, you can make it happen but it does take sacrifices. People ask me if they can be involved with White Fungus and as soon as I give them some work to do they suddenly say they’re busy. There’s this sense of a consumer culture – of instant gratification. This idea of sacrifice and hard work has been lost. For us, we’ve had a lot of hard years and we may have paid a very heavy price for it at times but in the end that’s the price you pay for doing what you want to do in life.

We want to counter more than mainstream culture but consumer culture as well – the culture where you buy your identity rather than discover it or create it yourself. With White Fungus we want to get away from that niche specialisation – we want to create a different response and bring different kinds of people together. We want to create an active reader – the reader has to play an active role in decoding our magazine’s content and creating meaning from it. I’d like to think that White Fungus doesn’t have fans but instead the people who read it are all people who I’d like to meet and who I do meet over time! I watch a big rock or pop band perform to 50,000 people and I think those bands don’t want to meet all these people after the gig! We’re doing things on a smaller scale but, even as things get bigger, we’d like to think that we’re cultivating readers who we do want to meet. This is totally different to the consumer model. We want to create a counter culture to that passive, over-specialised culture that creates these detached individuals who have little connection to other people.

Are you hoping to expand outside of the magazine as well?
We’ve been doing this more and more over the years. Last year we did all sorts of different projects. We brought an artist to New Zealand. We also had an exhibition/project of our own work shown at the Adam Art Gallery in Wellington, accompanying exhibitions by the Wellington Media Collective and Martha Rosler. We made poster works and a big broadsheet publication called The Consumers of the Future. The title comes from a quote by John Key on Campbell Live before he was first elected: “Our children are important ... they’re the consumers of the future.”

Also, Taiwan has just signed a Free Trade deal with New Zealand, too, so it looks like there will be the opportunity to do a lot of cultural exchanges between the two places. We really consider ourselves as artists who happen to make a magazine.