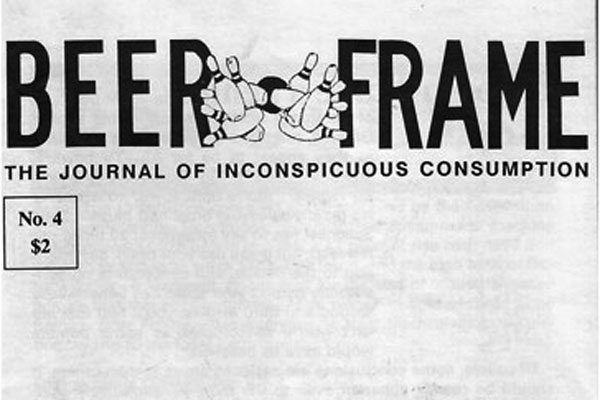 Zine of the Week

ABeer Frame is when all bowlers in a frame of ten-pin bowling get a strike except for one person. By tradition, the person who didn’t get a strike then has to buy everyone else a round of beer.

Beer Frame is also a zine. Originating in 1993, Beer Frame is one of the “role model” zines and the characteristic fringe style of appreciating the apparently unappreciated. In the long running zine, Paul Lukas lovingly reviews products from cat food and human torso models to the seemingly common and uninteresting. He also reviews services in depth such as receiving free suitcoat buttons and the “Apology hotline.”

Beer Frame is revered for bringing out the consumer in all of us. In Lukas’s words: “What is inconspicuous consumption? It’s about deconstructing the details of consumer culture – details that are either so weird or obscure that we’d never see them, or so ubiquitous that we’ve essentially stopped seeing them.”

Zines of the week are chosen by volunteers at Blackstar Books, Dunedin’s own anarchist-inspired community library and social space since 2003, located on Moray Place near the Octagon. Come by sometime – details and directions are available at cargocollective.com/zinefest
This article first appeared in Issue 6, 2014.
Posted 7:01pm Sunday 30th March 2014 by Staff Reporter.