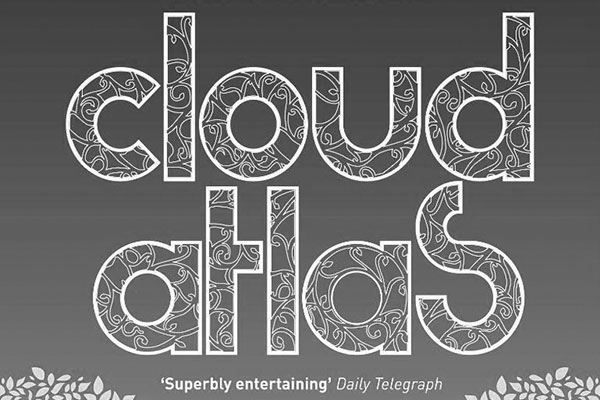 Cloud Atlas is David Mitchell’s third novel. His first won the John Llewellyn Rhys Prize, and his second – along with Cloud Atlas itself – was short listed for the Man Booker Prize. So I was expecting great things when I first picked this book up. I was not disappointed.

The novel is comprised of six nested stories, beginning with the journal of Adam Ewing – a young Californian man travelling home from the Chathams in the 1700s – through to the tale of Zachry in the distant and post-apocalyptic future. Adam’s story is interrupted mid-sentence to begin Robert Frobisher’s story about helping (and also swindling) an old composer in Belgium in the 1930s. In turn this story is interrupted to tell of Luisa Rey – a journalist in California in the 70s. Here is where we begin to see the connections between the stories. At first it is Robert reading Adam’s journal, then Luisa meets Rufus Sixsmith, a man who had been close friends with Robert Frobisher.

And it doesn’t stop there. Luisa’s story is interrupted by Timothy Cavendish, an elderly Englishman who was formerly a publisher. While hiding from some debt collectors he comes across a manuscript that just so happens to be Luisa’s story. At this point it is hard to tell what exactly is “real” in the book and what isn’t.

After Timothy, we head to a dystopian future and meet Sonmi, a genetically engineered waitress being interviewed about her growth from semi-conscious fabricant, to self-aware human, and the consequences that came from that growth. In this world, Timothy Cavendish’s story has been adapted into film.

And then we meet Zachry, in the only story that is not interrupted part the way through. Zachry is an old man, telling us the story of his youth, growing up on the island of Hawaii, after the Fall. His world has regressed to the very primitive stage, and Zachry and his people worship a goddess named Sonmi (how about that?).

When Zachry’s narrative is concluded, each story is concluded in reverse. It first returns to Sonmi’s interview and then, in this order: Timothy’s memoires; Luisa’s novel; Frobisher’s letters; and Adam’s journal. Each story is finally brought to a close.

Cloud Atlas is like nothing I have ever read before. In structure, yes, but also in its quality. I am not saying it is the greatest book ever written – though in my humble opinion, it’s definitely up there – but it is beautiful. Beautiful in the way it is written, in the way it is crafted, in its themes and in its characters. The connections between not only the stories in the book, but also Mitchell’s other works are clever. And the connections between the characters themselves, though hard to decipher when questioning which of the stories is “real,” are interesting and meaningful and spreading across space and time. Even the historical portions, particularly in the first story with Adam Ewing, are well researched. Mitchell enlisted the help of Michael King - one of New Zealand’s popular historians - to accurately portray the Maori and Mori Ori people living in the Chathams at that time.

There are only so many ways I can say how excellent this book is. But it’s true. It is excellent. I could not find a single thing wrong with it. It may not speak to you the way it spoke to me, but I have no doubt it will entertain you.
This article first appeared in Issue 5, 2014.
Posted 5:30pm Sunday 23rd March 2014 by Julia Gilchrist.