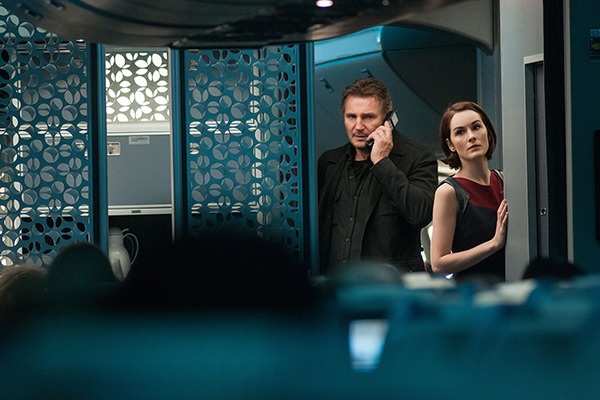 Almost the first shot of Non-Stop is Neeson’s grizzled Air Marshal pouring whisky into his morning coffee, so you know you’re dealing with gritty Neeson, not Love Actually Neeson. But then he sentimentally touches the picture of his daughter taped to the roof of his car, so you know he’s got a heart. No, this isn’t Taken’s damaged but ruthless ex-CIA Bryan Mills. This is alcoholic but committed Bill Marks. Totally different guy.

Actually, the body-count isn’t that high, relying on suspense rather than brutality for the majority of the film, and there’s a pretty decent “whodunnit” mystery throughout. Is it tough-looking bald guy? Blonde bunny-boiler with older man? Stereotypically Arabic guy? Surprisingly, they’re all portrayed by impressive acting – it’s actually a shame we don’t see more of them.

The action stays fresh and the pace is true to the title – and that’s the main problem. These people are stuck in a metal tube with a possible murderer and/or hijacker. Where’s the claustrophobia? The wild accusations? The overwhelming feeling of helplessness? Despite being told repeatedly that there are 150 people on this plane (goddammit!), it never feels like it – just Marks’ few suspects getting in one or two lines as he charges around the plane, never quite earning your sympathy.

I liked Taken because it stayed just on the right side of convincing me that, yeah, actually, if you kidnap an ex-CIA man’s daughter, he might well have a particular set of skills, and he might well use those skills to kill people in inventive ways. Non-Stop barely convinced me that they were on a plane.

I can’t fault it on being a big-budget, technically serviceable thriller. The cinematography is pleasant, if pedestrian, the actors are talented enough, and the script fulfils the title’s promise exactly as you’d expect. The flight angle just feels a bit tacked-on, nothing more than a rushed third act political point and an automatic stake-raiser. Non-Stop is distracting for exactly its run-time, and then you will never think about it again.
This article first appeared in Issue 4, 2014.
Posted 2:59pm Sunday 16th March 2014 by Simon Broadbent.