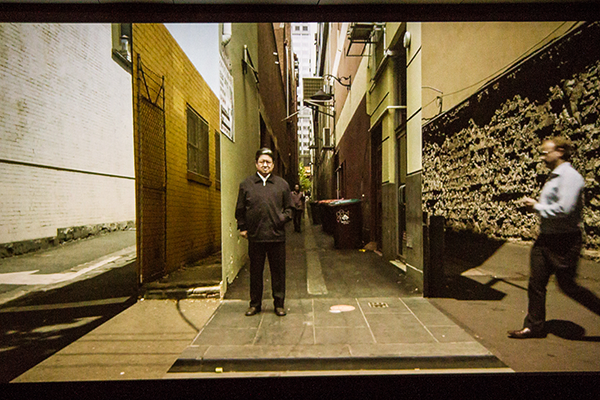 The use of technology has become a natural part of our lives. However, the idea of technology manipulating nature itself and becoming a controlling, dominating force tends to sit a little uncomfortably. Among the Machines is one of the Dunedin Public Art Gallery’s (DPAG) major exhibitions for 2013 and directly confronts this interrelationship between technology and nature – something that we have inevitably been affected by.

The concept behind Among the Machines rests on the themes developed in Samuel Butler’s Erewhon, a classic dystopian novel in which, much to the concern of the human race, machines control evolution. This novel is intended to act as a “catalyst”; artists involved in the exhibition are encouraged to consider the relationship between machines and natural phenomena.

The responses of the 13 New Zealand and Australian artists are diverse, ranging from a scan of the inside of a human skull to the creation of a utopian city on Mars. Either an artist’s subject matter presents a fusion of nature and technology or the medium itself reflects the idea – you often end up in a room staring at a screen. However, the exhibition does successfully generate different experiences within each darkened space.

Some of the works did not seem to fit within the theme as well as others. For example, as beautiful as Fiona Pardington’s works are, her photographs in Erewhon: Left for Dead in the Field of Dreams failed to establish a sense of technological infiltration as successfully as Ronnie Van Hout’s.

In contrast, the art that seemed to truly embody the theme were Hayden Fowler’s videos and the collaborative works by Hannah and Aaron Beehre, although they took the concept of a relationship between technological forces and nature in very different directions.

Aptly chosen as the advertising work for the exhibition, Fowler’s New World Order manages to manipulate the voices of chickens in a poignant yet entertaining way. Shots of a cold, harsh grey forest slide in and out of the frame, sometimes including images of a unique looking chicken perched on a branch. The piercing mechanical throbbing that meets you when the bird starts to “speak” is startling – painfully loud yet also enthralling. It is in being such an unnatural experience that it becomes so entirely engrossing.

Hannah and Aaron Beehre’s works were clever (although admittedly I tend to think this about most successful interactive art). Using small glowing orbs that react to the viewer’s movements in real time, he or she becomes part of the art itself. Without the audience, the artwork wouldn’t reach its fulfilment.

However, the Beehre’s Toward Mt Terror represented the downfall of this exhibition in general. There was no indication that the glass doors barring us from what seemed like the obvious entry into the room were in fact an intentional part of the work. As art’s general mantra is “no touching,” a similar problem was encountered with Douglas Bagnall’s Cloud Shape Classifier – it didn’t occur to most people that the black buttons next to the screens of clouds were intended to be pushed. More guidance was definitely necessary.

To enjoy this exhibition you need to dedicate a significant chunk of your time. Spanning almost the entire upper floor of the DPAG, the 24 works selected require you to travel through many different spaces and subject yourself to many different concepts. However, the DPAG does consistently impress me with its obvious desire to push art in an innovative direction. Running until 3 November, there is no excuse for missing out on this experience.