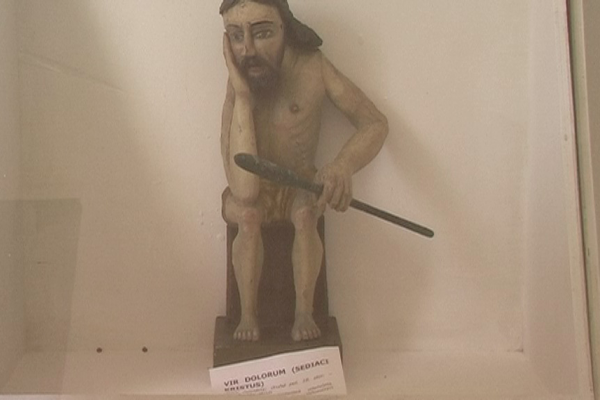 Patrick Hartigan - The People Will Be Healed

Standing at one end of the art gallery, we were completely entranced by a large guy in a grey fur coat, with basketball sneakers along the bottom. His mannerisms and laugh, even from a distance, were like those of a stereotypical Jewish banker. Coming close enough to listen to him, he also had some solid good-natured swearing, describing how he “started doing rap lyrics in a Maori accent” when trying to seduce a girl in an attempt to “blend our fantasy worlds so we could see into the future.” That is the nature of exhibition openings at Brett McDowell Gallery – always bursting with eclectic caricatures come to life with the guarantee of a memorable conversation. This week was no exception.

Every couple of Fridays at 5.30pm, Brett McDowell (a dealer gallery located opposite Les Mills) has an exhibition opening involving drinks laid out in rows on a big wooden table and the most interesting people in Dunedin. My favourite gallery space in this city, I go partly for the gaping holes in the old wooden floorboards, which Billy Apple loved so much he even made some art about them.

I trust Brett McDowell’s taste. There hasn’t been an exhibition yet where I don’t understand why the artworks or the artist caught his eye, even if there isn’t much I like about them. He has a talent for recognising artists with a unique quality to which people should be exposed, and Hartigan’s slightly depressing and confusing work was no exception. Sign up to the mailing list, if not for the kick of getting such a fancy-looking letter in the mail and telling your flatmates it’s an invitation to an exhibition opening, then at least to be part of such an interesting crowd in such a beautiful space.

This week, the exhibition was slightly different. I’m used to openings at Brett McDowell where you wander from wall to wall through groups of people mingling and discussing each other, occasionally glancing at the art itself. Thus, it was unusual to find only a looped video playing on a medium-sized TV in the middle of the room with the eccentric, fun people clustered in the corners. Patrick Hartigan’s filmed work, The People Will Be Healed, had, very deliberately, been made the stubborn, sole focus of the room.

Five modestly-sized portraits had been hung around the corner, distinctly separate from Hartigan’s exhibition. However, these abstract and unusual paintings’ presence put the artists’ style in perspective. Awkward and slightly macabre, they tie in with the hallowed religious Slovakian folk sculptures that feature in the video. Originally made for display in homes and small churches, Hartigan successfully demonstrates how our appreciation of these sculptures is thwarted and controlled by that which the world thinks can be “upgraded” to “art.” One screen shot taken inside the museum gave a red fire extinguisher as much attention as the glass cabinet containing it. Not only does Hartigan focus on the pieces within the museum, he shows us images of the mundane town (complete with tanned, tacky tourists) in which they are situated, forcing one to consider of the environment these sculptures inhabit, and how they have come to be there.

The sculptures are beautiful, solemn, contemplative figures, which were intended to be viewed in a comforting, normal environment. Instead, as Hartigan states, they “lie forgotten by the museums entrusted with owning them,” as the museum is unable to afford to hire an attendant. We see the grime on the front of the glass cabinets, and Hartigan compares the impression made on him by the exhibition to the sight of his father dying from cancer a few weeks later. A morose piece, Hartigan seemed desperate to emphasise how aspects of our lives make transitions into “dying” states.
This article first appeared in Issue 12, 2013.
Posted 1:24pm Sunday 19th May 2013 by Charlotte Doyle.