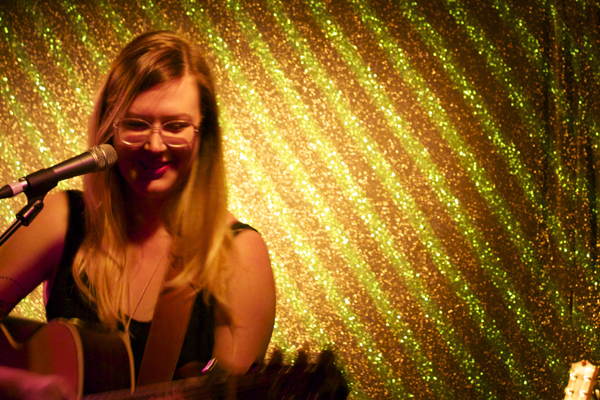 Nadia Reid and Ivy Rossiter (a.k.a Luckless) recently performed at the iconic and allegedly haunted Chicks Hotel in Port Chalmers as part of their Ballads and Badlands national tour. Brittany Mann went along for the whiskey and good times.

Ballads and Badlands is Nadia Reid and Ivy Rossiter’s first major collaboration. Described by Reid as an exercise in “abrasive folk,” the Badlands tour was conceived of at the beginning of 2013 but was only put into motion a couple of months ago. “What we’re doing – it’s not overly lighthearted,” says Rossiter. “It’s not flossy and pretty, necessarily – it’s got some kind of substance to it. The idea of travelling through the badlands … it can be real badlands, like a desert road or the Linders Pass, or it can also be the badlands of your soul.”

For Reid and Rossiter, life on the road is a something of a “suspension of reality.” Rossiter explains: “In real life, there’s all of these very complicated problems that need solving all the time. But when you’re on tour, everything is completely immediate and you get to do what you love doing every day.” The girls’ appreciation for their rapidly-expanding fanbase is deep. “That people would actually show up to see us play is totally insane,” says Rossiter. “They’ve got fireplaces and cats and kitchens and books and all of these other things competing for their attention and yet, they come out and they see us.”

Reid and Rossiter have been playing live shows since they were in their mid-teens and early twenties, respectively, and have each released an EP (Letters I Wrote and Never Sent and Luckless). Reid is about to drop her second record. “I’m definitely feeling like I’m starting to find my groove in the last year or so,” she says. “I’m really excited about [the EP]. I totally have a clear idea of what I want and where I want to go.”

The girls first met through mutual, musically minded friends in Auckland; Reid has been based there since late 2010, whilst Rossiter has recently escaped to become a “musical nomad” on tour for the foreseeable future. While both artists tend towards “introspective music with a slightly darker side to it,” the girls’ musical styles differ markedly, occasioning a curiously arresting crossover of genres that, according to Reid, is “a good point of difference for this tour.”

The Chicks show was the girls’ fourth on their 15-venue national tour. “Once we did it last night, we knew we could do it,” said Reid, originally from Port Chalmers. “I like coming back to Chicks because I like seeing familiar faces, bringing some new songs and some new vibes. Every time I come here, I feel like it’s a real stepping-stone. Tonight, it’s on different grounds – we’ve never done this before.”

Dunedin local Bill Morris, whom Luckless first met on the Interislander, opened the gig, which transpired to be more a troika of sets than a true collaborative effort. Morris accompanied himself on both the guitar and the harmonica and, according to a friend I had taken along, “clearly had a lot of feelings.” A bluesy, Kiwi Bruce Springsteen in lyrics if not style, Morris endearingly laboured under the misapprehension that experience equals wisdom for the entirety of his set. Singing passionately of working-class melancholia, Morris had relatable song lyrics that referenced things like the “Rotovegas Warehouse car park.” Indeed, my group concurred that what Morris lacked in metaphor, he made up for with raw poignancy. A friend had the shrewd revelation that, “Give a prole a harmonica, and you get that guy.”

After 45 minutes of hearing Morris describe various places around New Zealand as “shit holes,” Rossiter took to the stage with an electric guitar and a drum machine. Rossiter’s style has been described as “distorted abrasiveness and looping chaos,” and like a darker KT Tunstall, the girl could use a Boss looper pedal like nobody’s business. There is a chance that Rossiter was once told she wouldn’t be taken seriously unless 80 per cent of her chords were in the minor key, but the intrigue and quality of the sound in no way suffered from this.

Apparently having attended the class at guitar school on reverberation and arpeggio and wagging all the others, Rossiter’s set was engaging and extremely enjoyable, with songs “All I Want Is Sleep” and “The Others Fill This Room” being my favourites. Though her chat wasn’t great, when Rossiter sang, one had the sense that one was seeing the artist stripped back to her true self. And it was profoundly stunning.

I was looking forward to this set, having seen Reid perform numerous times in the past. With a style that has been described as “acoustic new folk” echoing artists like Beth Orton and Laura Marling, Reid showcased this exquisitely by beginning her set with an soul-stirring a cappella number. A bold move that very few could pull off, Reid executed the song flawlessly and would continue to indulge the audience with “new originals and old favourites,” as promised by the tour’s press release, for the rest of the evening.

Accompanied by Richard Pickard on the double bass, Reid was on the acoustic guitar for most of her songs, including “The Rise And Fall,” which Reid wrote when she was only 17 and which was featured on the 2011 documentary When A City Falls. Reid’s set was utterly transfixing. She did not just sing, but truly performed, every last note (it got to the point where members of the crowd were cheering mid-song) and there was a haunting wisdom in her lyrics that had the crowd enchanted from beginning to end.

The night ended with Reid and Rossiter collaborating on a few of each other’s songs and ended with an enchanting cover of “Long Black Veil.” After almost three hours it was over, but I left wanting to hear more. The best gig I’ve been to all year, I sincerely anticipate Rossiter and Reid’s return to Dunedin one day soon – though it was their first alliance, I hope it will not be their last.
This article first appeared in Issue 12, 2013.
Posted 1:24pm Sunday 19th May 2013 by Brittany Mann.