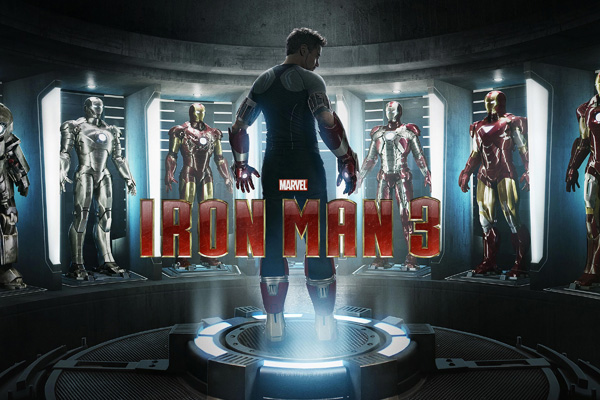 Much like the prodigious production of Marvel superheroes themselves, a veritable avalanche of Marvel films has been unleashed in recent times. This century alone, 27 Marvel superhero films have assaulted New Zealand cinemas. Some of them – The Avengers and The Amazing Spider-Man – were damn good. Most were average. Others rank among the worst films ever made (I’m looking at you, Ghost Rider). Whatever; with nine more set to appear in the next two years, the future indeed looks marvellous.

The first two Iron Man films fell into the “average” basket. Robert Downey Jnr is great as Tony Stark/Iron Man and Gwynneth Paltrow exudes a calm sass as Pepper Potts (it must be her excellent nutrition). However, both films were let down by patchy scripts and co-stars, derivative plots, and underwhelming villains. In most of these respects, Iron Man 3 is a marked improvement.

After the events of The Avengers, in which a wormhole is opened above Manhattan and half the island is destroyed in the ensuing battle between an army of alien invaders on one side and a rag-tag group of superheroes with wild divergences in acting ability on the other, most people have returned to their normal lives. As you would. Not Iron Man, though. Iron Man now has Issues, Issues that he needs to Work Through in order to Grow. These issues are manifested in insomnia and a series of laughably unrealistic panic attacks, and are probably not helped when a terrorist called The Mandarin (seriously, that’s his name) lays some spectacular CG smack down on Stark’s clifftop mansion.

Poor Iron Man. Good thing he’s got a cutesy, wise-cracking kid to help him out as he tries to repair his suit, take down the mysterious Mandarin (Sir Ben Kingsley), and go kick Guy Pierce’s smarmy arse. (Actually, the kid scenes are far from the cringefest they could easily have been, and contain some of the film’s funniest lines.)

Meanwhile, his friend Col. Rhodes (Don Cheadle), having stolen one of Stark’s suits in Iron Man 2, now works for the US government and has been rebranded as Iron Patriot. Thankfully, this decidedly sinister development isn’t entirely airbrushed away. In one scene, Iron Patriot blasts down the door to an Afghan sweatshop, and the workers flee in either panic or elation. “Yeah! You’re free!” a slightly confused Rhodes enthuses. “You were slaves, right? ... I guess you were ...”

The most confusing aspect of Iron Man’s four recent screen appearances has been the sheer inconsistency of his powers. Depicted as moderately powerful in Iron Man and Iron Man 2, he was suddenly upgraded to godlike prowess in The Avengers. Here, however, he is weaker than ever. In particular, Stark’s suit demonstrates that the Inverse Ninja Law (the more ninjas there are, the less of a threat they pose, the ultimate threat being a solitary ninja) applies to heroes as well as villains. In more than one scene his suits are liberally destroyed, something an entire army of highly-advanced aliens was unable to do once in The Avengers.

Based on my Wikipedia research, The Mandarin is also unrecognisable from his comic-book version. This is possibly because in the comics he was basically Fu Manchu and Hollywood isn’t really supposed to do that sort of thing anymore, except with the Russians. Either way, though, the changes have left the film without a truly compelling villain. This is unfortunate, and it reminded me just how much I’ll miss Batman over the next few years.

A final note: although I am (slowly) coming around to the merits of 3D, in this film the 3D adds absolutely nothing to the experience save for a greater lightness of pocket. See in 2D and save yourself some Benjamins.