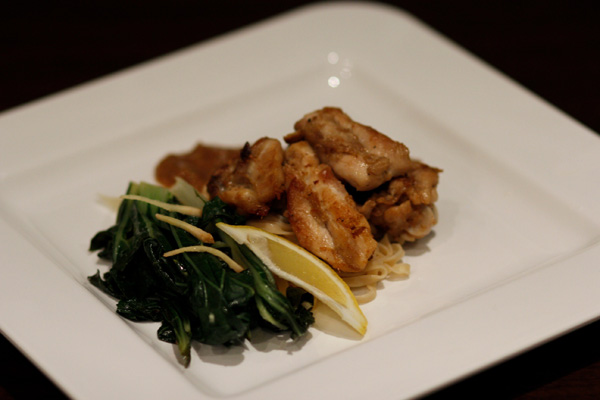 This dish satiates the tastebuds on every level: it’s sweet, salty, and ginger-laden, with crispy chicken ready to soak up all the fun. Rice bran oil is a great choice to use for high-temperature cooking, and is also neutral in flavour, allowing your other ingredients to shine. Frying chicken over a high heat with ginger and garlic results in delicious not-so-small tidbits, with a crunchy garnish of sorts left over in the pan. You can sprinkle this over the chicken, or be a glutton like me and eat it straight from the stovetop. Coconut powder can be found at specialty grocers, and is a convenient alternative to coconut milk when you need only a small quantity of liquid. Simply add water, stir briskly, and you’re set. It doesn’t impart the same intense richness of canned coconut milk, making it perfect for the satay sauce, which focuses on the nutty, salty flavours from the peanut butter and soy sauce. I’d stick with the canned stuff for curries, however. Get your greens in with steamed bok choy, gently flavoured with ginger, lemon and sesame oil. Lay on the sauce and you’re good to go.

1. Heat the oil in a wok or large frying pan. Add the onion and cook until soft over a medium to high heat.

2. Add the peanut butter and stir until melted. Slowly add the soy sauce until you reach the right level of saltiness. Add the sugar to taste. Add the coconut milk and simmer, stirring, until thickened. Set aside.

3. Heat the second measure of oil over a high heat. Add the ginger, garlic, and chicken. Cook for 30 seconds until brown. Add the second measures of peanut butter and soy sauce and stir to incorporate. Turn the heat down to medium and keep stirring until the chicken is cooked through.

4. Place the white of the bok choy, followed by the green, in a steamer. Steam over boiling water with the lid on until almost tender. Transfer to a hot pan with a squeeze or two of lemon juice, a splash of sesame oil, and the second measure of ginger. Cook for one minute, then remove from the pan.