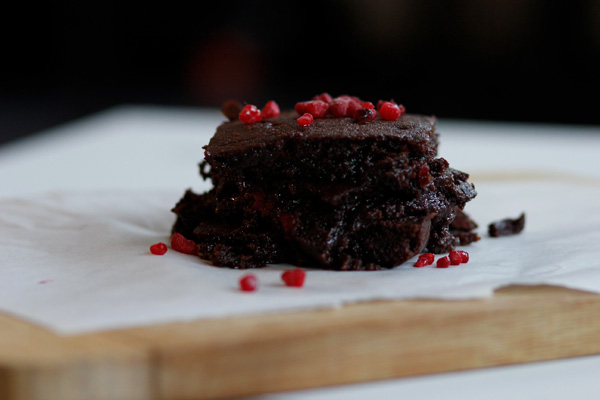 This brownie is immoral and fiendish. Unlike the consistently firm, cake-like brownies often found sitting pretty in cafe cabinets, this is far more brutish and unforgiving. On the Chocolate Baked Goods Spectrum, it sits far closer to a decadent slice of fudge than a cake. Luckily, it has a more complex texture than pure fudge. Adapted from a Nigella recipe, it eats like a pudding, though be careful not to overheat it if you choose to have it warm, as it will probably melt into a puddle of hell. Not necessarily a bad thing, but some structure is nice. To cut through the richness, be sure to serve it with something tangy and chilled, like thick yoghurt (Piako’s lemon curd gloriousness would be my recommendation), fresh raspberries, or sorbet. Don’t eat too much at once – I have warned you.

2. Cut the butter into about eight chunks, and break the block of chocolate into six to eight chunks. Place in a medium-sized saucepan over a low heat. Stir until melted. Remove from the heat.

3. Mix the vanilla essence and sugar into the chocolate. Set aside for 15 minutes to cool.

4. Add the eggs and flour to the mixture, stirring until smooth. Add more flour (up to 1/4 cup) if you want a firmer brownie, but too much and you’re really missing the point of this fabulous filth-fest.

5. Pour the mixture into a baking dish or tin lined with greaseproof baking paper. Scatter over the raspberries, and press them into the mixture. I used a particularly large dish, so the mixture was only two inches thick – I cooked it for 17 minutes before removing it from the oven. Thicker brownies may need up to 30 minutes. Ultimately you want the brownie to appear set around the edges, with a mostly to completely set surface, but still a bit wobbly beneath.

6. Allow to cool at room temperature for half an hour, or speed up the process in the fridge. When it appears firmer, slice it into outrageously large squares, and pile two to three squares on top of each other, depending on how thick they are. This will give you a sinfully good brownie, with several fudge-like layers, which you can cut into smaller pieces.

7. Serve on a reasonably empty stomach with a liberal dollop/handful/scoop of one of the suggested accompaniments.