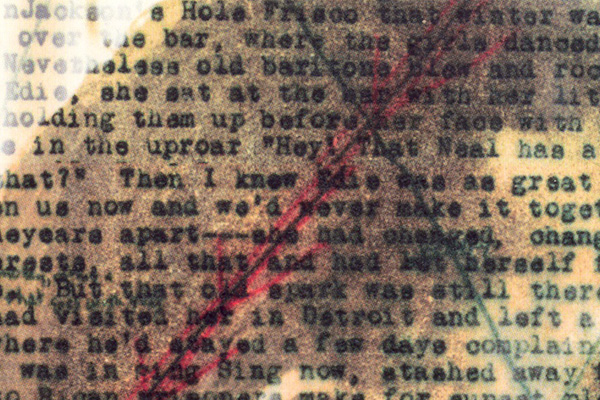 In the autumn of 1957, Jack Kerouac picked up an early edition of the New York Times from an all-night newsstand in the Upper West Side, Manhattan and read Gilbert Millstein’s review of On the Road. Millstein declared the novel “the most beautifully executed, the clearest and the most important utterance yet made by the generation Kerouac himself named years ago as ‘beat,’ and whose principal avatar he is.” Indeed, Kerouac coined the phrase; ameliorated its original colloquial meaning of being “tired-out” and “worn-down,” to imply instead the upbeat and beatific nature of a stranded generation striving to be free from the restrictive conservativeness and conformity that characterised American society following the Second World War.

The postwar rhetoric went: work hard enough and you can have anything you please – a house, an automobile, a refrigerator – all the material features emblematic of success and domestic tranquility. But Sal Paradise, the novel’s narrator and main character, is in search of something else after divorce and illness has left him feeling empty. Sal finds Dean Moriarty.

Dean’s spontaneity, recklessness, and peripatetic lifestyle inspires Sal to leave home and hit the road. He busses and hitches across the county to meet Dean in Denver. They have their “kicks” together until Sal pushes on to San Francisco, then Bakersfield and Sabinal. After a job on the docks and a relationship with a Mexican farm girl, Sal eventually returns home, hungry and penniless. By Part One’s end, it’s apparent that Sal’s internal struggle to choose between having kicks or the domestic life is a central theme of the novel.

At first just a free spirit, Dean Moriarty’s character swells, and his role within the narrative carries the bulwark of the action. He’s the pilot: a madman whom Sal follows. From New York to New Orleans, New Orleans to Denver, Denver to San Francisco, Dean becomes increasingly erratic. He marries women, makes babies, and leaves them for the road. He too cannot settle down for long. But the impact his decisions have on others does not go unnoticed by Sal, especially after Dean ditches him in in San Francisco. Still, Sal defends Dean, and the deeper they travel into America and through her guts, Dean – the juvenile delinquent, son of a hobo father – evolves. He becomes a sweaty, blabbering saint. An angel chained to the present that cannot recognise the past or future.

The kicks, the jazz and the drugs take Sal, Dean, and all the other characters in the novel along roads that connect and fissure. The intense experience of “living life to the fullest,” which living on the road bequeaths to the traveller, is counterbalanced in the novel by hunger, fatigue, and selfishness. In On the Road the reader recognises the dual function of being “beat.” Bliss and starvation intermingle in the narrative, permeating its latter pages with the perfume of a climactic vision quest. Mexico happens, and then something big happens in Mexico. After Mexico, Sal has to make a choice the next time he sees Dean – and he does when he sees him in New York months later.

On that early morning in 1957 after reading the Times’s review of his novel, Kerouac appeared to his friend and future biographer, Joyce Johnson, as less than upbeat. The author appeared surprisingly underwhelmed and empty. He awoke the next morning a literary star, a burning roman candle modeling the “beat generation,” the “king of the Beatniks”: a title he felt uncomfortable with for the remainder of his short life. “I’m not a beatnik,” he once said to a reporter. “I’m a Catholic.”

Kerouac did not write an autobiographical account of his adventures on the road between 1948 and 1950 in order to spark a cultural shift. Nor did he intend that On the Road would eventually be deemed a novel that defined a generation. He wrote something that was true to his experience, and set out to communicate that truth to the best of his ability. Kerouac’s emotional honesty is what makes On the Road an artifact, nothing else. Read this novel from within the confines of its cover, and it will feed you for years to come.