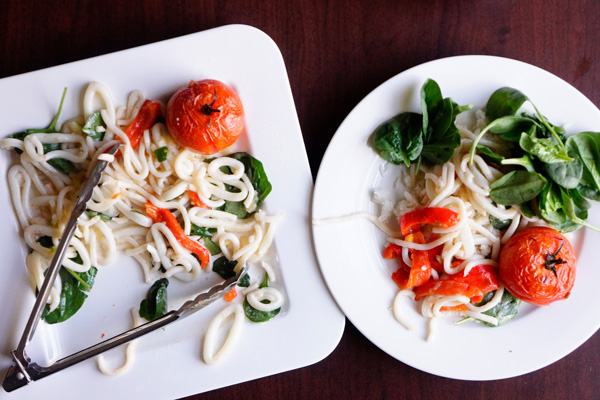 Squid is incredibly easy to incorporate into exciting dishes due to its tender texture and ability to be complemented by a range of flavours. You can pick up 500g of squid from the supermarket for $7 on special and when accompanied by the udon noodles, this meal will stretch out to feed three or four people. The noodles with their natural softness also enhance the divine texture of the squid achieved by flash frying it. This “salad” can be served hot from the pan but is equally as good cold after sitting in the fridge for a few hours. Though there are a few separate steps to its preparation, it is by no means complicated to make and the udon, squid and dressing can all be prepared while the peppers and tomatoes face the grill. Lemon or lime juice is essential to cut through the otherwise delicious oily and nutty dressing. After a long day, smashing together the garlicky dressing with a mortar and pestle is a guaranteed stress reliever. The most fun of this dish is piling it onto a plate with a whole roast tomato (which are wonderfully cheap at the moment), then splitting the tomato open over your individual meal and allowing the juices to mingle with the spicy, garlic-infused dressing.

2. Place the peppers (skin side up) and whole tomatoes on an oven tray lined with baking paper. Drizzle with 1 TBS of the olive oil and a pinch of salt, and grill for about 20 minutes.
The tomatoes should be blistering and soft, and the peppers blackened and soft. If the tomatoes are particularly large, they may take longer than the peppers.

3. Once cooked, place the peppers in a bowl and cover with a plate. Leave for a few minutes then you’ll have no trouble peeling the skin off. Slice the peppers into thick strips. Keep the tomatoes whole.

4. Rinse the squid tubes, then slice into rings about 1 cm thick. Pat dry with a paper towel to get rid of as much excess moisture as possible. Set aside.

5. Grab your trusty mortar and pestle and bash the remaining 4 TBS of the olive oil, 2 TBS of the sesame oil, chilli, garlic, salt and sugar. This is a great way to work flavour into the oils, but if you don’t have access to a mortar and pestle simply chop the garlic and chilli very finely and allow it to sit in the oils, salt and sugar for at least 10 minutes at room temperature. You can pick up a generous bag of chillies from the farmers market for just $5.

6. Heat 2 TBS of the sesame oil in a wok or large frying pan. Add the udon noodles and a splash of water. Cook over a medium-high heat, stirring with a wooden spoon to separate. Set aside.

7. Heat the final 2 TBS of the sesame oil in a wok or large frying pan. Add the squid rings, tossing frequently. Cook for just a few minutes over a high heat until tender – any longer and they will become tough. If a large amount of excess liquid appears in the pan, you can quickly drain it off through a colander and return the rings to the pan, but it’s easier to avoid this in the first place by making sure they are dry when you initially add them.

8. Toss the squid rings, udon noodles, peppers and garlic dressing together. You may like to add some baby spinach for colour, or some roughly chopped coriander. I like both, but opted for spinach out of convenience, having a bag in the fridge. (Coriander would probably blend with the flavours better but it seems to be frequently despised, the most hilarious criticism being that “it tastes like bugs.” So go with whatever works for you, or skip the greens altogether.) Pile onto plates with a whole tomato and a good squeeze (or three) of lemon or lime juice.
This article first appeared in Issue 5, 2013.
Posted 6:30pm Sunday 24th March 2013 by Ines Shennan.