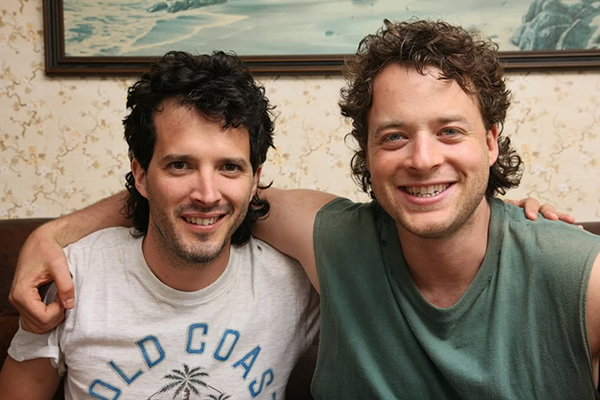 Two Little Boys is the story of Nige and Deano, two best mates from Invercargill. Nige (Bret McKenzie) finds himself in way over his head when he runs over a Norwegian backpacker. He confides in his friend Deano (Hamish Blake), despite their recent disagreement over a toasted sandwich. However, in the foolish fashion typical of two friends, Deano decides to make a bad situation worse by convincing Nige to hide the body.

Deano later hacks the remains of the backpacker into small pieces without consulting Nige and becoming obsessed with killing Nige’s only other friend, Gav (Maaka Pohatu). These insights into Deano’s character and his persistent bullying give the film an increasingly disturbing air, which the audience is expected to brush aside in order to embrace the “Kiwi humour”.

Nige’s incompetence and inability to stand up for himself stretch the film’s credulity beyond breaking point. The three characters take a trip to the Catlins, the home to many fond memories for Nige and Deano, and end up jumping off a cliff, not suffering any injuries. At this point, though, it’s difficult to see how the audience can be expected to be in the mood for laughter.

Another issue with this film is its lack of commitment to the Southland setting. Its portrayal of the Catlins is fantastic, yet the characters, who are supposedly Invercargill born-and-bred, don’t speak with the obvious Southland “r”. Surely the filmmakers are able to portray a small amount of diversity in New Zealand cinema?

Two Little Boys’ only redeeming qualities are a superb performance by Maaka Pohatu and its imagery of the Catlins, which conveys a true sense of Kiwiana. The creative folk behind this film deserve kudos. The screenwriters don’t.
This article first appeared in Issue 26, 2012.
Posted 5:01pm Sunday 30th September 2012 by Ashlea Muston.