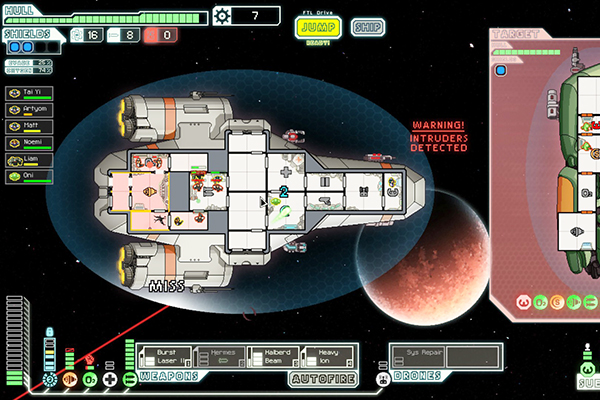 In a quantum instant, a single broadside torpedo slips through the rickety space-cruiser’s momentarily downed shields, and ignites the oxygen recirculator. Immediately, the grizzled captain shuts down the blast doors and opens the ship’s port and stern airlocks, evacuating the gaseous contents from most of the hold in an attempt to quell the ever-spreading blaze. It works, but the non-functional pump that should be keeping the crew breathing clean air is trapped on the other side of an isolated interstellar frigate that contains no air at all.

One crewmember – I named him after a semi-close personal friend (I’m in the captain’s swivel-chair, obviously), is ordered to make repairs on the unit. He proudly takes up the challenge, and a deep breath, stepping through the blast doors into the vacuum. It is a suicide mission either way. Even if he repairs the wretched machine before he suffocates, the room he stands inside will be refilled long after his brain tissue begins to decay.

He dies a hero, allowing the wounded vessel to deliver its vital plans to the federation.

Such is the nature of FTL, a procedurally generated rogue-like that allows you to act out all your favourite Star-BLANK, or if you’re classy, Firefly fantasies. It’s awfully important to constantly scream “reroute the power from X to X” inside your head. A good captain must decide whether it’s more valuable to have functioning shields to deflect laser blasts, or super-juicy engines to evade cursed shield-ignoring torpedoes at any moment.

None of your onboard systems or subsystems is unimportant. In fact, all are vital in exceedingly common, and frustrating, situations. Without a functioning door-control it’s impossible to remotely shut off the ship’s soft innards to the chilling space-cold. If a cruel boarding party had crashed the ship’s most mundane system, then the above anecdote about the SS Critic would have ended very differently.

FTL is brutally hard. Saving your game is impossible. Every playthrough, every journey across the stars, is its own unique story with a unique sequence of events. Ships you meet can be tremendously kind and gift you with extremely rare weapons and a tonne of scrap, which functions as both currency and experience. Most often they are mean old pirates, megalomaniacal rebels or a socially confused, or easily offended, alien race.

It remains tremendously satisfying. There certainly are unfair moments, when your clunky junk is assaulted by some kind of class-F destroyer frigate in an early part of the game. Every time I failed, though, I felt like I’d learned something – something little or something big. It’s this sense of genuine progress, I think, that makes FTL insanely addictive. It is a complex, but immaculately balanced collection of game mechanics that I almost can’t find fault with.

There is space-method to get out of any given space-scenario. A player must appreciate the right time to go into warp-speed and jump away from a threatening foe. In case such a scenario comes up, they must keep an eye on their fuel reserves. In FTL, (It stands for faster-than-light if you’re curious) you must know when to hold them, when to fold them, and, most importantly, know when to walk away.