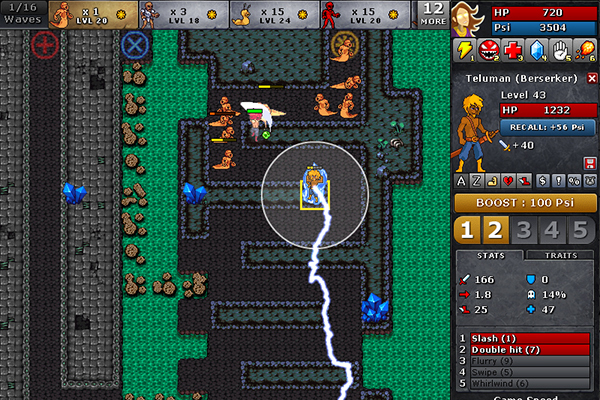 "Grinding” doesn’t sound like a great way to spend one’s time, does it? A mule in a medieval mill did a lot of grinding – of grain – to turn it into the coarse, unrefined flour that was the serfs’ staple food supply. That gameplay mechanic, as popular as it has historically been in classic Japanese RPGs, is cheap. To me, arbitrarily forcing a player to replay the same battles over and over again in order to beef up their characters so that progress becomes possible is a repetitive way to pad out a game’s length. In some ways it is also diametrically opposed to the idea of a tower defence game, and is the reason that the otherwise brilliant Defender’s Quest is undeniably imperfect.

Defender’s Quest takes place in a pixellated path through a kingdom of vast grassy fields bordering choked deserts. The story is extremely self-aware, and cheekily makes fun of all the generic fantasy conventions that it employs. Strangers join your party at the drop of a helm, and all are skilled in conveniently contrasting disciplines. The story isn’t important, but the dialogue bubbles that make it up can easily be skipped, and it’s good for the occasional mild chuckle when the mood strikes you.

It is a typical tower defense game, albeit one with a staggering attention to detail, except that the towers are all human members of your party – with pseudonyms, military equipment, and abilities that you allocate to them with the experience and currency that you gain in the battles. It’s a terrific idea. Having a large, ever-growing posse of heroes to assist you is a nice feeling. Games like Mount and Blade and the indie game Queens are as fun as they are partly for that reason. You set up your buddies on the edge of a course, and zombie and worm foes rush down the roads to your wizard character. Setting up all your warriors in the correct location and equipping them correctly is imperative to succeeding.
The trouble is that tower defence games are fundamentally about fine-tuning your strategy. They are satisfying when defences are set up in an inspired, reasoned way, and the player gets to watch the dominoes fall in exactly the way he or she hoped they would – with minimal interaction. You can cast spells, but they tend to be used whenever possible to boost your characters, or as a last resort to directly damage enemies.

Grinding unfortunately makes this fine-tuning impossible, because you never know if you are supposed to be able to beat a level. Am I failing this section because I’m not thinking about it or strategising correctly, or am I failing because I haven’t done quite enough arbitrary work beforehand? Defender’s Quest is still terrific, addictive, and satisfying, but two of the components that contribute to its greatness cancel each other out somewhat.