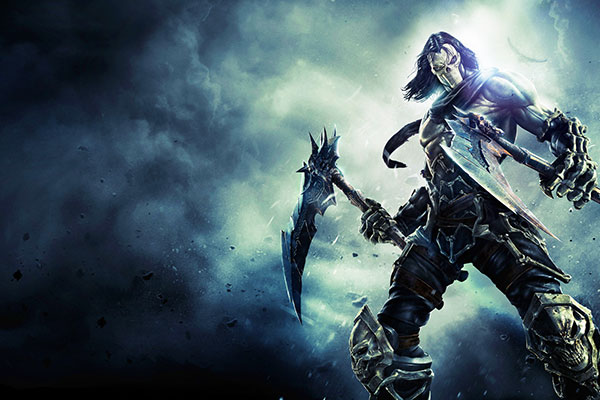 Darksiders II is the The Amazing Spider-Man of the video game world: endlessly derivative, and pretty unnecessary, but undeniably effective nonetheless. It is an action-adventure, beat-em-up puzzle game with RPG and platform elements – a pick’n’mix of fundamental mechanics that everyone finds somewhat fun.

You play as Death, a fusion of the horse-riding and reaping interpretations of that ultimate mortal fear. He wears a Jason Voorhees-style hockey mask and speaks in a rock-polisher timbre just like every male game protagonist ever. The apocalyptic dressage rider sets out on a quest to, paradoxically, reverse the extinction of humanity and prove his brother War (from the first game) innocent of said crime. It’s a convoluted tale, packed with semi-demi-gods and quasi-pseudo-god-demons and a big powerful council of some kind. The tale is all about hand-wavy magic legislation, but it serves its purpose as a way to get Death to fancy Zelda-style temples and fight monsters much larger than he. It can feel epic at times too, just as long as you listen to the voice acting itself rather than the corny dialogue it carries.

Most of the game is spent fetching, or possibly activating, a variety of artifacts in vast ancient architectural wonders. Puzzles are never frustratingly difficult. Never are they easy to the point that they feel like a chore either, but there are never any “aah, I see!” moments. Darksiders II has temples that are just tough enough to be consistently satisfying and fun, but nothing more. New puzzle solving tools, such as pilot-able mechs with extendable chain arms, are often utilised, but you will still find yourself rolling large balls and exploding spiky bombs throughout the game.

Even the seemingly insignificant details seem to invoke a powerful sense of déjà vu. The horse you use to traverse the game’s vast and rich overworld has discrete stamina “bits”, rather than a continuous stamina bar. Using one up in exchange for a brief boost reminded me immediately of Epona’s tasty carrots. Something about Death’s subtle caress of walls as he runs across them instantly made me remember Prince of Persia. You heal when you level up, often after slaying a vast gothic enemy who drops gold in half a dozen inconvenient piles. Conventions like restoring health at important milestones and finding gold on quadrupeds that have no way of carrying it are clearly not unique to Diablo, but the way that certain moments in Darksiders are staged seem to scream “SCHTAY A WHILE AND LICHSTEN” at a deafening volume. It isn’t necessarily a bad thing — it ensures that the entire game works well and feels cohesive. It’s just… interesting.

Combat is fun and fluid. Death has two of his trademark scythes, miniaturised and duel-wielded as a fast basic weapon. His alternate weapon might be heavier and slower like an axe or hammer, or lightning-quick and vicious like a clawed glove. My combat strategies tended to involve fleeing backwards in such a way that all my foes were forced to follow me in a tight group. There is a sense, again, that perhaps enemy variety leaves a little to be desired. Then again, it never really gets boring. Death gains experience which can be spent on new necromantic or combat powers.

Every facet of Darksiders II functions well, but none of it does anything new. You can collect loot, mountains of the stuff. Even if, in the end, all you actually do is decide whether “67 – 96” is a better number than “71 — 92”, it is still satisfying. There are some mild platforming sections too — Death shimmies across ledges and clings to pillars. I must stress that nothing feels like an afterthought. Nothing feels tossed in to tick a box. Nothing is broken and nothing is frustrating. However, nothing is new. There are no “wow” moments. Darksiders II is one huge “Yep, that was kinda fun” moment, but there’s something to be said for that. As an academic exercise, at the very least, this is a game that shows you how to construct a cohesive whole.
This article first appeared in Issue 22, 2012.
Posted 5:17pm Sunday 2nd September 2012 by Toby Hills.