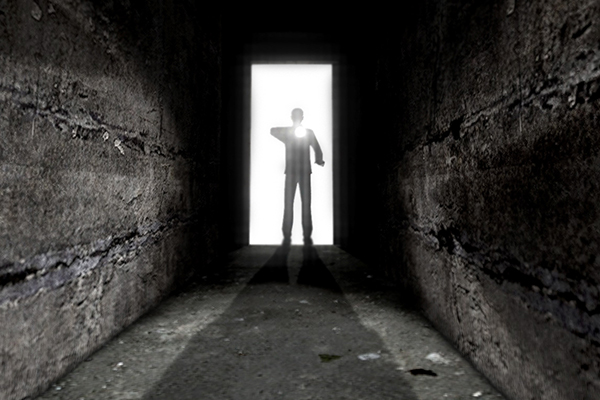 SCP-087 is a never-ending, descending collection of thirteen flights of stairs on which a number of scary “things” happen. I say “things” because SCP-087 prides itself on being procedurally generated. A scary “thing” could happen on the second flight down, or nothing could happen for a painfully long while.

The staircase is damp concrete with a corroded banister. A claustrophobic, semicircular roof is constantly above your head. A creepy, randomized audio track changes as you descend. It’s all very atmospheric even with nothing explicit going on.

In my descent, for example, nothing at all happened for 30 minutes. This was interesting in and of itself. As I plodded down staircase after staircase, watching the numbers on the wall slowly increase, every miniscule shadow started to become terrifying. I’m not sure whether the black movements I saw were deliberate, ridiculously subtle touches (if they were, then the restraint in the design of the game is remarkable), whether they emerged from my jerky mouse movements, or whether they were completely manufactured by my imagination.

I didn’t play the game a second time. It’s a bit scary and stuff. So I can’t exactly remark on the breadth of different outcomes, but the prospect of new playthroughs (especially watching your friends) is enticing.