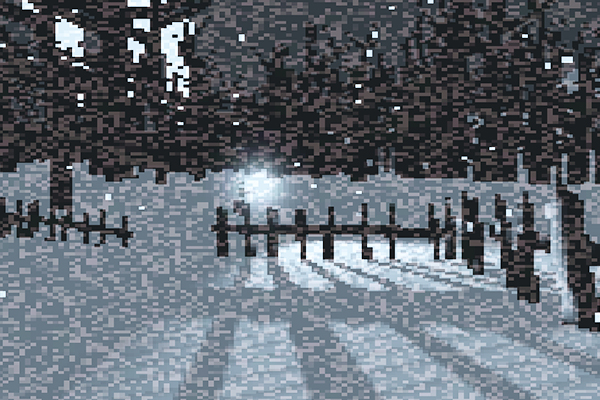 Hide opens with a spacebar-shaped rectangle next to four typical directional buttons. The spacebar is labelled as allowing the player to “hide”, but really it’s an utterly useless crouch button. Squatting slightly closer to the freezing snow that makes up the game’s environment does not fool the stalking, blinking lights.

The game is part of a recent fad of free-to-play, independently developed, very short horror games. Hide, for example, claims to 10 minutes long. It isn’t. The labeled plaques you need to find are easy to miss, nailed to one tree in a forest of dozens. Finding them all is especially tedious because you stumble along, panting heavily, at the pace of someone who is utterly exhausted.

The aesthetic, at least, is evocative. The game almost looks like television static, your vision constantly blurred by single pixel snowflakes. Buildings are vague shadows until you approach them, at which point they loom out of the blizzard revealing their true structure.
It’s an interesting game that reveals nothing explicit about its background story. Clues are sporadically doled out to you in the form of the writing on the plaques and the nature of the lights that stalk you.

Is it scary? It could be. In the dark, alone, very few games that disempower you aren’t. It’s a noble game because the foes never jump out at you unexpected. You can always sense them edging slowly towards you.