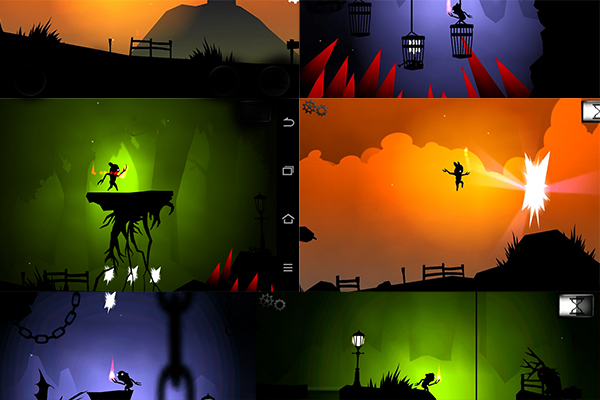 In Oscura you play, in established platform-game tradition, as a small mammalian everyman who plies a noble trade. Not a bandicoot plumber, I’m afraid, but a non-specific rodentish creature who attends to the lighthouse on a fantastical island. One day the bulb is shattered, unleashing shadowy demonic creatures onto the shore. It’s up to you to gather together all the light fragments and restore a peaceful glow to your home.

The themes of light and shadow, pretty standard nowadays, are extremely welcome on a handheld platform. Oscura is blatantly inspired by Limbo, but the use of one colour (or lack of it) to render all the pitch-black apparitions that stalk you is as resource-friendly as it is evocative. A tangle of gnarly horns on a simple stumpy body rendered in black is much scarier than any pixellated, colourful fanged beast could be. Oscura is illuminated from behind by a tinted green or red glow (unlike Limbo’s simple blacks and whites), and everything looks like a shadow play studded with the occasional red, cycloptic eye.

Oscura is fairly successful at implementing basic platform game mechanics on a touch screen. Touching anywhere on the right-hand side of the screen causes your cretin to start accelerating in that direction, tapping on the left causes it to jump or double-jump. Travelling left is thankfully also possible by swapping around these instructions. Winged and horned foes must be avoided, as well as the necessary spike pits and comically large industrial cogs. Oscura certainly functions, but in a platform game precision is everything. I wouldn’t go so far as to say that the controls are frustrating, because they work and the game is fun, but a tangible feeling of suboptimal-ness lingers in the back of your mind for most of the game.

The level design is pretty great. Certain foes gain frightening momentum, and being able to gain ground quickly and escape their clutches by a hair’s breadth is always satisfying. Timing is important, and the levels are slightly easier than they would be in a title with a gamepad. Developers from MTV (strange, right?) do their best to make up for the touch controls.

At only 12 shortish levels, Oscura is a bit light on content. Sure, each level can be re-platformed again in an attempt to gain four stars’ worth of points, but speed runs are the context in which fine-tuning really is important. If you’re trying to get a perfect run of every level then you really will miss proper button controls.