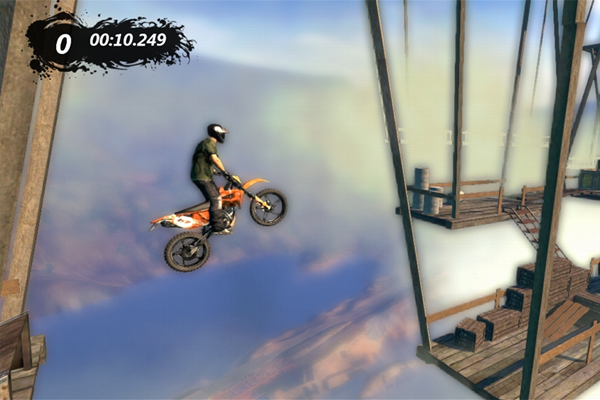 Trials Evolution is frustrating. Not just because it’s really hard, but because the art-direction of its levels loves to poke fun at you. A Nitro Circus-inspired motocross rider can slide effortlessly along a thin girder on a partially constructed skyscraper. That’s no trouble. Yet he tends to bite the dust, over and over again, thanks to timid-looking bumps on featureless dirt tracks.

The player controls a rider through a 2-dimensional track packed with dips and jumps. It all starts out suspiciously simple. The pitch of the rider can be shifted forward and back with a control stick and the triggers control braking and acceleration. Initially the goal is merely to man-trol the bike through the air so that it approximately matches the angle of the landing ramp.

Things ramp up. Part of what makes the Trials games addictive is the idea that it’s possible to complete a level, but it’s also possible to complete a level: A bronze medal might be awarded for merely stumbling past the finish line without your bike exploding, but a gold only comes to players who players who micromanage their landing angle to optimize their speed every single time.

The very second license test has you riding up a concave ramp and back-flipping onto a second platform. Tracks test pretty different sets of skills. Sheer speed might be imperative in one, immediately followed by a sort of lateral thinking puzzle on which paths are the best to find.

The tracks are varied and gorgeous – even if they are purely aesthetic changes and every level can be distilled down to a single line with ups and downs. Some are subtly pretty exercises in light and darkness, with the light level blooming and fading with the height of the bike. Others are completely ridiculous, surrounding you with detonating munitions dropped from visible bombers and vicious barbed wire. The motion of the wheels triggers everything, so stunt planes ands explosions tend to arrive at exactly the right time.

Trials HD, the 2009 predecessor, is one of the best selling XBLA titles but Evolution seems to make it fairly redundant. Everything is bigger, brighter, louder and faster.
This article first appeared in Issue 12, 2012.
Posted 7:58pm Sunday 20th May 2012 by Toby Hills.