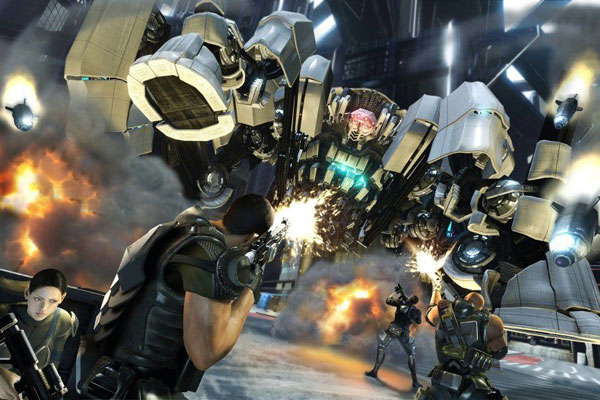 If you asked someone who had never played a videogame to describe a one you would be provided with a fairly accurate breakdown of Binary Domain: A group of burly humans, who form a gleaming ethnic-rainbow, gun down robots that swarm about the player like schools of herring.

It ain’t necessarily a bad thing. As frustrating as a lack of inspired game-design is, Binary Domain is unpretentious and, for what it is, refined. The totally-not-Terminators-honestly react believably to the obligatory bullet-hail; their outer armour sloughs off to reveal a chrome inner skeleton and their legs can be blown off. In response to the latter they crawl after the player’s squad in a totally-not-like-the-end-of-Terminator-One-honestly sort of way.

Everyone knows that videogames teach kids that violence has no consequences. Here, this manifests itself as a health-bar that regenerates after popping your head behind a wall in the context of a solid cover system. Punching a single needle through the chest wall heals any character who has been knocked down. It is an obvious series of combat mechanics with a variety of different guilt-free metal men to dispatch.

There are subtle differences between your squad-mates. Some are good at explosions while some are better and being tasty-looking robot-bait. Commands can be issued to your buddies to get a strategic edge on the artificial hordes. It isn’t subtle; there are obvious situations where obvious tactics are required – but it remains satisfying to put them into effect.

Normally, one wouldn’t get so intimately involved in a game as to begin believing it’s real, but Binary Domain supports this cliché. If a student owns a headset then flatmates can expect to hear enthusiastic cries of “Charge!” in an attempt to wrangle the game’s voice-recognition software. Slowly, these cries are likely to be replaced by slightly bored cries of “take cover” or “Wang. Wang. Look at my huge penis.” It’s a gimmick – the game can be played adequately using a controller – but the game’s additional squad-mates do have replies to certain phrases such as “I love you.”

Unsurprisingly, the story is uninteresting and the characters are unlikable. There’s some really half-hearted Blade Runner-style ethical intrigue surrounding robots who don’t know they are robots (covered in an organic skin. Of course). Every cut-scene is, without fail, annoying. It’s just more interesting to shoot robots. The protagonist is a roguish rebel and his friend is a huge, African-American and makes the “Cole Train” (from Gears of War) look in no way a stereotype.
This article first appeared in Issue 6, 2012.
Posted 7:07pm Sunday 1st April 2012 by Toby Hills.