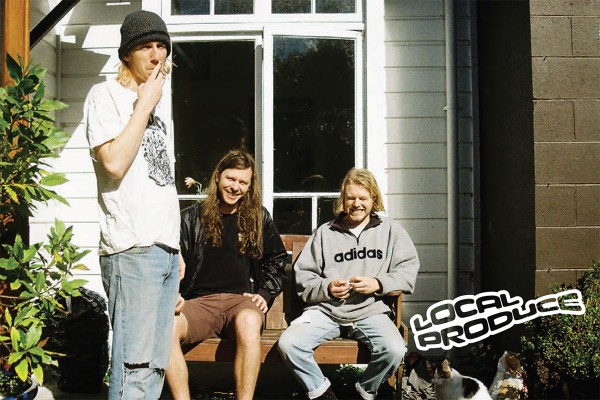 Sunflower Scent have been on the scene for a few years now, shooting thrashing riffs right into your ear canals. Critic caught up with two of the band members, Jamie and Liam, for a catch up on their latest projects and a bonus botany lesson.

Jamie and Liam started making music together in 2019. They attended the same high school in Nelson but weren’t mates until they met later on in Dunedin. At the time, Jamie was studying music. Liam himself didn’t pick up the guitar seriously until meeting Jamie. “That summer we got chatting and Liam was really keen to play guitar,” said Jamie.  For the first two years, it was just Jamie and Liam. They were then joined by Matt, another attendee of their highschool and a friend of Liam’s. Liam and Matt share guitar and bass between them, while Jamie was performing the incredible feat of both drums and lead vocals. This was up until recently when Ben joined the band’s lineup as the drummer.

When asked to describe their sound, Jamie laughed. “Alt-rock-grunge-pop, maybe?” Perhaps their ironic name, Sunflower Scent, more aptly describes their hybrid music than any easy-fit genre label. It came to Liam at a gig, while describing the plot of Samurai Champloo to someone. “The main character is looking for the samurai that smells like sunflowers - but sunflowers don’t have a scent,” explained Jamie.

Sunflower Scent’s music traverses many genres, with their headbangers being a combination of doomy, bubbly and danceable, sometimes all at once. Their range is likely due to their approach in making music, which is communal and comes from pure enjoyment of the process. “Jamming together to come up with something is a good way of keeping things new… And a good way of making sure that everyone’s tastes are coming together,” said Liam. “Everyone feels like it’s partly their song. It’s not like it’s one person’s band or song,” said Jamie.

Sunflower Scent released their debut album ‘Little Helpers’ back in April. Written over last year and recorded September through November, the digital release mirrors their natural sound. “It’s pretty [much] like how we sound live,” said Liam.  Putting out an entire album was a learning experience for the band, but a challenge they overall enjoyed. ‘For Free’ is Liam’s favourite track on the album. “That song was a real knuckle-down… I think the fact that we got it to the point where it was good enough to go on the album, that’s why I really like it,” he explained. Describing that track as a “little battler”, Jamie had a different answer: “‘Sleep.’ I think that’s my favourite. It had the most re-listenability, personally.”

Though it’s only been a few months since the album release, the seeds of creativity have been growing in the form of new material. “All my favourite songs to play live now are the new ones we’ve been writing…we’ve already moved on to almost six or seven songs that aren’t from the album,” said Liam. The next months are huge for Sunflower Scent, packed with gigs, acoustic session releases and even a music video drop. They’re in the rad line-up of bands slated to play DankFest at The Crown, August 26 - 27. Before that you can catch them at Pint Night on August 20. ‘Little Helpers’ is up on major streaming services and you can follow Sunflower Scent on FB or Insta (@sunflower.scent).