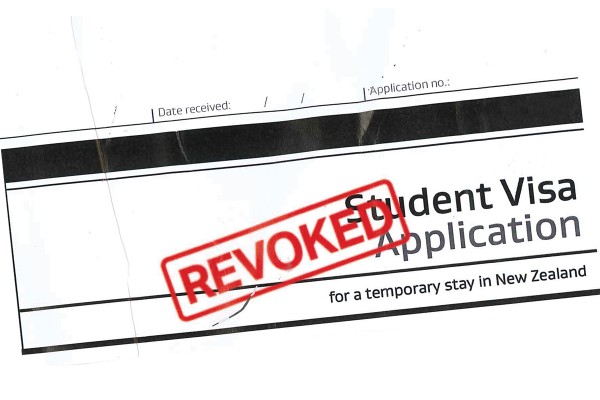 Why did your student visa get revoked?

You’ve made it across the border, into the airport and down to Dunedin. Now that you’re in the filthiest Uni town Aotearoa has to offer, there are plenty of ways to get yourself into trouble. So, tell us, how did you lose your visa?

What’s your ideal night out?
a. Cramming for tomorrow’s exam
b. Quiet night in
c. Flat dinner
d. Headed to the ice hockey
e. Pub quiz showdown
f. Getting on the rark
g. Pint night

You made it to NZ, but a letter from immigration just came notifying you of an error in your application. It turns out that the $5,000 you scraped together to “prove” you have funds to live on was not quite enough. See, with the rising costs of housing and food, immigration had to re-do their policies on the fly, and you no longer count as rich enough to study here. So, out you go!

Last weekend, a mate of yours offered you $20 to clean up their kitchen. It was a big weekend, and there was quite the mess. Always happy to help, you obliged. As soon as the cash transferred hands, an immigration spokesperson jumped out of a nearby rubbish bin and slapped some cuffs on you. You’d broken the terms of your visa, apparently, by working during your stay. Silly you – international students are meant to be loaded, and taking even a single cent out of the NZ economy is punishable by immediate deportation on a flight that, of course, you have to pay for.

You bought a $50 bag from a friend at a party, which was all good. The problems arose when your flatmate ran out of weed and asked you for half of yours. Being a good flatmate, you agreed to give them $20 worth, and they paid you cash. Then, suddenly, an immigration spokesperson crashed through the window and slapped you with a conviction for distributing an illicit substance. They pulled your student visa out of a file and burned it in front of you, laughing all the way. Your flatmate used the flames to light their cone, and waved a teary goodbye.

Mostly D’s: You bottled someone at a Castle Street party

While it may be all fun and games in your home country, you’ve gotta be pretty careful when travelling overseas. So, when you were raging at that street party, and watching everyone else get to bottle strangers, you may have made a poor choice. One thing led to another, and you had a cheeky bottle toss or two. If a Kiwi student does this, it’s all just chalked up to “classic Dunedin antics”. But if an international does this, it’s assault. Congrats, you’re being deported and you now have a criminal record.

Mostly E’s: It’s actually been two years since it expired and you’ve been in the bush since then

So, technically, you could’ve seen this one coming. While you were abroad here, Covid hit the scene and really showed you how poorly your home country is run. Not wanting to go back, and seeing a golden opportunity arise, you just gapped it and have been hiding on the West Coast this whole time. You were finally caught by an immigration spokesperson who has been tracking you this entire time. They weren’t even mad - they were actually quite impressed with your antics. You still got deported, though. Can’t be here if you’re not spending money.

Mostly F’s: You got a DUI and fled the country

After getting to Dunedin, you had to move some furniture to your new flat. You figured the best time to do this would be late at night, when the streets are empty. So, a box deep, you figured now was the perfect time. You immediately get pulled over and breathalysed, which you fail, and now you’re being told to expect some serious legal heat from the Uni and from the police. So, before they get the chance to kick you out, you board the next plane back home to Ohio.

Mostly G’s: Nothing wrong, you got denied for health reasons

You followed every guideline, every law. You had the funds necessary to apply. Your grades were stellar. But you didn’t even make it into the country; your visa application was denied because you notified immigration that you have a minor health concern. Seeing this, officials decided immediately to decline your application, lest you become a burden on New Zealand’s healthcare system. Sorry, kiddo, no free healthcare for you. Maybe try Canada.