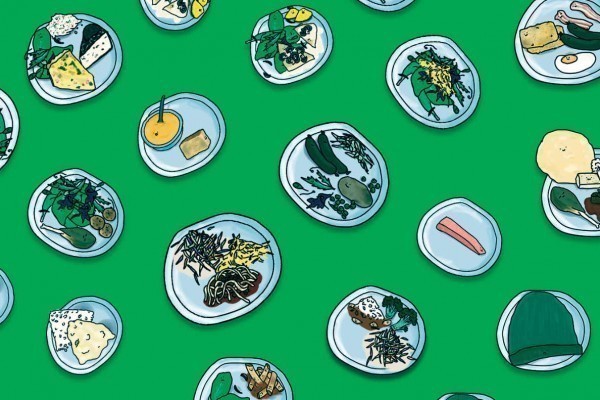 Broke Student Food from Around the World

Everyone is intimately familiar with some variation of broke student food, the sort you stumble through making after a night on the piss, or eat with your hands while crying in bed. There’s a certain comfort to its simplicity (toasted sandwich, anyone?), and it always manages to taste like home. Or tears. Same thing. Not everyone goes straight for the cheese rolls or instant mi goreng, however. While we waited on the Cost of Living Payment, Critic Te Arohi chatted to students from different ethnic and cultural backgrounds about their favourite cheap recipes. After all, you can’t compromise on flavour, but you can always compromise your dignity.

“Ngāi Māori have a few infamous meals” Sky told us, “stemming from the traditional feeds our ancestors passed down to us. Boil-up is an absolute no-brainer; it comprises pork, potatoes and pūhā (watercress). It’s a cheap option that you can switch up however you like - swap out pork bones for cocktail sausages for an extra Kiwi kick. Not just an easy way to feed the flat, but the juice is also liquid gold.” Doughboys can also be added to boil-up, said Sky, describing them as “Basically just Māori dumplings. A few cups of flour and warm water will bring you wonders, all you need to do is mix and knead, then boil in water or add to stew!” They also make a “killer dessert” she said, so make a bunch to suit all your needs. Another cheap and easy classic is fry bread (paraōa parai), said Sky. “All you need is a bit of yeast, sugar, flour and warm water. Knead up and drop in a bit of hot oil, tossing on each side,” she said. Fry bread is versatile too – “Many eat parāoa parai with stew, boil-up, or hāngī,” Sky said, “but modern twists have emerged with sweeter renditions, likened to the American beignets with icing sugar, or topped off with jam and cream.” We love a flexible queen.

Anita, a student we spoke to, had a pretty ingenious way to avoid cooking during her favourite struggle meal. “I’m half Thai and my go-to food when I’m broke or real lazy would be egg fried rice with dried shredded pork, which usually comes in a can,” she said. “It’s very convenient since I can’t cook.” Preserved, shredded pork is a favourite in many Asian cultures, and is strongly flavoured, meaning little is needed for a satisfying meal. “There are two types of dried pork,” Anita explained, “the pork floss is ‘moo yong’, and the small pieces are ‘moo wan’ or sweet pork.” Both are popular toppings on white rice, or even sandwich fillings, making the tasty but lazy meal options endless.

“As an Indian Muslim chef I could give many tips,” Mustafa told us, “like how going to Indian supermarkets for spices and seasonings is way cheaper than normal supermarkets.” Indian supermarkets often allow for buying in bulk, and are a cheap and environmentally friendly way to stock up on spices to improve many a depression meal to come. Mustafa also shared his tips on cooking a basic dal: “Lentil dishes are incredibly cheap and filling with rice. Clean the lentils, and soak them in water first,” he explained. Rinsing the lentils can remove impurities, and soaking them in hot water then allowing them to cool is a popular tactic in dal preparation, making the lentils easier to cook and digest. “Boil 'em with a can of tomatoes and water with some salt and pepper till soft, add a chicken stock cube if ya have one,” Mustafa continued, “then add cumin, turmeric, chilli powder or flakes and you’re pretty much good to go.” Buying all those spices at Gardens would bankrupt you, so Asian or bulk stores are the safest bet. Shot, Mustafa.

Sri Lankan: Sambal, Parental Affection on the Side

“Most students in Sri Lanka live at home,” Akisha told us, “so they get fully cooked meals from their parents.” A skuxx move, honestly. “I'd say a lazy student meal was coconut sambal (a spiced condiment) and dahl (lentil-based dish) with toast,” she said. Sambal can be made at home using ingredients such as shallots, lime and chilli, and is a popular element that completes many Sri Lankan dishes, whether simple or complex. It can also be purchased readymade, for the extra lazy. “Here I make Sri Lankan fried rice too,” Akisha added, an easy and popular dish incorporating basmati rice with fragrant spices. It’s a good way to use leftovers, or even the most tragic veggies from the bottom of your fridge.

“I never liked mac n’ cheese, and honestly never understood how that was a comfort food for some people,” said Gemma, a half-Chinese student. “My easy comfort food is a cheap pack of fresh noodles instead, with a bit of sesame oil and soy sauce. You’re meant to cook them on the stove, but when I’m real fucked I just sorta steam them in the microwave and it works okay,” said Gemma. Fresh egg noodles, that is, noodles that do not come dry needing to be boiled, are a staple in Chinese cuisine. Hokkien noodles, which are Gemma’s favourite, are a thicker and chewier variety often used for stir frying, like lo mein. “They’re like a dollar sometimes,” she said, “and it’s slightly less depressing than instant noodles, plus it’s always been my family’s favourite comfort food, along with a good congee. Like, peasant food but bougie.”

Adeyemi grew up in South Africa and has Nigerian roots. He preps meals in advance to save money, but isn’t able to incorporate the taste of home he wants. “I can’t cook traditional Nigerian home cooked meals because this bitchass town doesn’t have the ingredients. It’s very limited. Kinda pissed me off,” said Adeyemi. “I feel like Dunedin needs an African store,” Adeyemi said, “Egusi is my favourite traditional dish and I crave that shit on most days,” but he’s unable to find it here. Egusi is a popular West African foodstuff, and is made from the dried and ground seeds of various gourd-like vegetables. It is used to make rich and tasty soups, and is one of the many beloved staples of traditional Nigerian food. “It’s fucking delicious,” Adeyemi said, “Not the healthiest food sometimes but dammit, it makes us happy.”

Chilean: Flash in the Pancake

José is “110% Chilean”, and was eager to share some Latin flare, budget style. “The old reliable is a can of tuna with one egg, mixed, whisked, chucked in a pan, and there you go–you got yourself a nice tuna pancake,” he said. “I have that with some white rice or plain pasta, maybe some ketchup on it, and you’ve got yourself a full-blown meal!” José mentioned another easy cheap recipe he’s a fan of, albeit a less authentic one. “I recently found the best recipe. You basically mash up a banana, add an egg, some cinnamon, some protein powder and oats. Then you got yourself a pancake! You can probably tell I love pancakes.” Critic formally notes that José loves pancakes.

“Cabbage and rice is a winner for me, with soy sauce and a little sprinkle of the bag of MSG that my grandma got me as my going away to Uni present,” said Denzel. MSG, short for monosodium glutamate, is an umami seasoning that occurs naturally in many vegetables and proteins. It can be purchased cheap at Asian grocery stores, and a little goes a long way to spruce up any drab meal. “I also bulk it out with onion,” he continued, “because the only thing hardier and cheaper than cabbage is brown onions. Another frequent go-to for me is tinned mackerel in tomato with chopped onions and birds-eye chilis,” said Denzel, describing a favourite throughout Southeast Asia. “I have half the can with rice for dinner, then put the rest in a toastie the next day,” making it a true frugal fave. “My dad said a treat for their flat of boys in Sydney in the 90s was a chicken thigh each, marinated in the cheapest oyster-flavoured sauce and nothing else,” he said, “and then after dinner they would snuggle up in their shared beds to save even more money.” Bropilled.