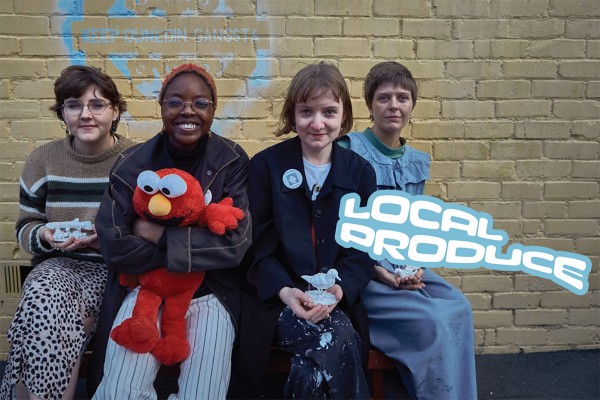 In the early nineties, the riot grrrl scene started in the U.S. Pacific Northwest. It united feminism and punk ideologies through music, fostering a gender-inclusive DIY subculture. Riot Gull are one of Ōtepoti’s newest bands, their name a play on that movement. Critic sat down with the band to talk the gig to gull pipeline.

Riot Gull is Lucy (guitar), Deborah (bass), Gemma (keys) and Madison (drums). Riot Gull is also a bit of a supergroup, which in riot grrrl might translate to The Frumpies or Le Tigre. Lucy is in Porpoise and in high school, and Lucy and Deborah played together in the band Soy Milk. Gemma is a Radio One DJ and Madison has an extensive past in the Dunedin music scene. Lucy and Gemma both have classical music backgrounds, piano and voice respectively, but are also critical of the form’s gatekeeping. Lucy: “I’ve always hated the snobbery of classical…why can’t I be in a punk band and do classical?”

Madison describes Riot Gull’s sound as “serious-but-not-serious”, her drumming leaning into traditional punk and post-punk with jazz inflections. Bringing a grittier, heavier ‘no men’ ethos to the scene, Gemma says “[we’re] kind of forcing people to listen to us being angry.” Their original set consists of titles such as ‘Bus Crush’, ‘Umami’, ‘Sleep’ and ‘Icky Hole’. These songs articulate their experiences, frustrations, anxieties and reconciliations. The band’s intent to create also springs from navigating spaces that Gemma describes as “man-washed”, aligning with prototypical riot grrrl values. For Deborah, who is Nigerian and grew up in Dunedin, this goes a step further: “I more draw inspiration from feelings or messages that I'm trying to convey. Especially with the Dunedin scene obviously being very Caucasian…going to gigs I never see anyone that looks like me.”

Riot Gull are highly collaborative in their creative approach. Their music unifies the individuals’ creative ideas and allows them flexibility in their vocal and instrumental delivery. Morphing these ideas in their sessions is catharsis as music making, an act that all look forward to bringing to the live performances alongside their local contemporaries. Madison: “When you’re in a very local thing…you are getting to share a lot of stuff at any stage of development with your friends, have their kōrero around it and enjoy seeing each other grow.” For musical inspiration, they have been drawing from Aotearoa musicians and particularly mihi local legends Mary Berry for their ethos. Lucy and Deborah as Soy Milk remember receiving support from the iconic band a few years back.

The raucous energy of the seagull is an energy the band deeply respects. Deborah: “I love the energy when you just see them randomly squawking. I’d like to have that energy.” The polarising nature of the gull is also a draw. Lucy: “So many people hate seagulls for no reason. Just because they think they’re annoying, make too much noise and try to steal food.” Seagulls and humans have commonalities too, and Madison resonates most with the tarāpuka (black-billed gull) with its cryptic nature that leads it to hide in the ground. Gemma provided the realest reason for gull-human solidarity: “I tend to steal people’s chippies.”

Find Riot Gull in their natural habitat, The Crown, on June 3 performing in a very nature-esque lineup alongside Flesh Bug and Wet Specimen. They are also lined up to open the long-awaited and much esteemed ‘Nightzilla’ gig on July 2. Follow them on Facebook or Instagram (@riotgull).