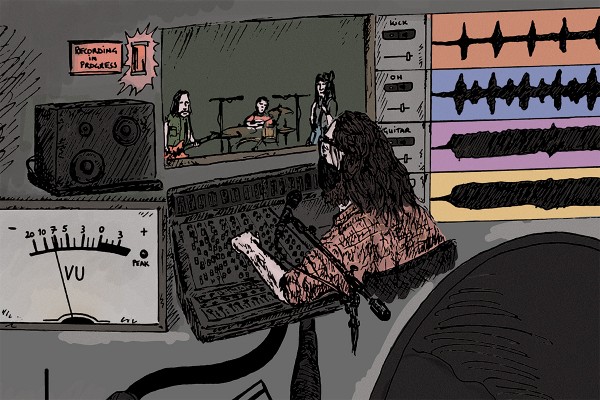 The Dunedin Sound Engineers who Bring Music to Life

Behind every live gig, song, or album is a wide range of people whose jobs are crucial to curating the final product. One of these jobs is the role of sound engineers, whose technical skills, attention to detail, and ability to feel the beat bring the music we love to life.

Chances are if you go to any gig in Dunedin, the sound engineer behind the show is a student. Samuel Leaper and Rutene Rickard are two Otago students who can be spotted working gigs, while juggling their studies.

“Before I came to uni, I hadn’t considered it as a career, I’d done sound before through high school, but I didn’t know much about it,” Samuel said. After having some music production papers cancelled due to Covid, Samuel reached out to one of the sound guys at Starters bar, and began learning the ropes from him. Rutene told a similar story. “From my own music interest at home, from playing drums, I wanted to record myself and my mates,” he said. His interest translated when coming to uni, and he began working with Strawberry Sound and studying music technology.

Samuel and Rutene both agreed that the role of sound engineers is an intricate and crucial part of the musical process. Sound engineers don’t just tinker around with nobs and buttons as many may believe. Instead, being a sound engineer also means you’re a manager, a psychologist, a producer, and a musician all in one. “Any pop artist, they can come in with a song that’s acoustic, they’ve just got the chords. The way it’s mixed, it’s that dance aspect, [so] without sound engineers, it’d be hard for pop to be so catchy and emotional,” said Rutene.

“[Sound engineers] are the ones that work with the artists, and say ‘if we inject reverb, it will have this emotional effect’. Anyone can put on a mic and record themselves, but “sound engineers hold this key to accentuating what an artist already had to further the vision, which paints a sonic picture.” Rutene remarked that sound waves affect your emotions, making the role of sound engineering “almost psychological”.

“With one button, I can mute the entire thing,” laughed Samuel. “You need all sorts of things, someone to understand the technology, someone who can get the vocalist singing to the entire crowd. A bad sound engineer is the difference between the audience having a great sound versus a gig where there are problems happening; a good sound tech will make or break the performance.”

Hugh Harlow is one of the Professional Practice Fellows in music production here at Otago. “Most forms of music rely heavily on some form of engineering or production,” he said. “With classical performances, whether it’s an orchestra or jazz band, a lot of that music is acoustic that the musicians control, with more contemporary music like rock or pop, it relies on sound reinforcement and live sound production.” Hugh said that while sound engineering is still considered a rather niche interest, the past few years have seen an increase in popularity surrounding music engineering and production. “It’s become much easier to make music yourself. If you think about it, traditionally, since the early days, you’d have a sound engineer. But now it’s easy to get results at home without having the same amount of skill or knowledge,” due to an increase in technology and software which is available to the everyday user.

Hugh also mentioned that sound engineers have grown in importance as people now have higher expectations of what they want to hear at gigs, and the sound quality which is available to listeners. “Back in the Dunedin sound era [during the 1990s and 1980s] it was all very cobbled together, people playing in flats, you’d be lucky if you could hear the vocals” he said. “But now, people have higher expectations of what they want to hear, and it’s reasonable, the technology’s become so much better, we can make things sound so much better, and bands need people who can help them realise that sound quality.”

While the job of a sound engineer may seem ultra-exciting, as you get to spend your days and nights surrounded by music, it still comes with its set of challenges and tribulations. The industry is competitive, the hours exhausting, and the employment precarious. “I often get nervous, if I’m not too certain,” said Samuel. “Suddenly, you’re in charge of the whole thing and if something happens you need to know how to fix it.” Hugh said that from a teaching perspective, because he has so many eager and intelligent students, it can be difficult knowing how tough the industry is that they will go into.

“There aren’t many roles or security as an engineer, or not in the way it was traditionally,” he said. “I get disillusioned about selling the dream to students, because it’s competitive, it seems unfair to say ‘come study here’ and we can’t make any promises,” he said. “It’s a glamorous industry because you get to hang out with musicians and play with cool toys, that makes it popular in a way, but it is competitive. Not everyone can make a career out of it, you do it despite the fact there are more lucrative jobs out there,” he said, with a laugh.

Alongside this are the insane work hours. “It’s not uncommon to get home at 4am after working, every venue and every show is different, but it’s a lot of late nights,” said Samuel. “I find that with uni and work, you can’t sleep, it takes a toll.” Rutene agreed, also remarking on the struggles that come with working live gigs, including when gig goers have a few too many drinks. “You’re finishing late, adjusting your bedtime, some people, when they’re drunk at gigs, and no blame to them, don’t understand the value of equipment engineers work with,” he said.

For those wanting to get into sound engineering, or who are considering studying it, Hugh said the biggest piece of advice he’d give is “listen to music… Read about music, immerse yourself in music, don’t get hung up on fancy toys, train yourself to listen, and listen in a way that most people don’t.”