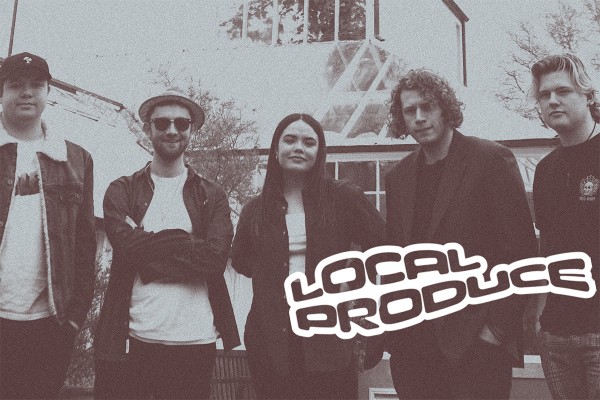 Emily Alice, the band, is Emily Kerr-Bell (vocals), Josh Botting (keys), Toby Roseman (guitar), Josh Tuiavii (drums) and Sol Wyatt (bass). Critic Te Arohi chatted with the band about their upcoming music, their studies and being inspired by the sounds surrounding them growing up.
The band formed last year, meeting through their shared study of contemporary music performance. “We didn’t anticipate starting a band,” shares Josh B. Initially the group came together for assessments, performing covers then eventually pivoting to their own projects. “Emily wanted to do originals and I always wanted to do originals…it was a natural, organic process.”

Emily Alice creates a feeling of nostalgia in their music. “It’s a powerful emotion,” says Josh B. “It’s very hard to achieve but I think we get close with some of the things we do.” Their sound is primarily pop with inflections of jazz, funk, soul and RnB, crediting artists such as Amy Winehouse, Olivia Dean and Silk Sonic as their biggest influences. Emulating musical styles that were more popular in the past is what allows Emily Alice to appeal to a large range of listeners. “Older people love the style because it’s [like] stuff that they used to know and love.” Meanwhile, Emily finds that their peers are often surprised. “Young people are like ‘holy cow’, you know. ‘We didn’t know people our age were making this sound’,” she says.

At the same time, Emily Alice draws heavily on their musical studies, using their original music to test themselves with class content. Josh B and Toby credit their lecturer David Harrison for encouraging them to create music that is both accessible and musically sophisticated at once. In their songwriting, Emily Alice explores colourful harmonic movements and modulations. On this, Josh B, who is the band’s core songwriter, says that although these finer details might be missed by the usual listener it adds to the depth of their music curating another level of appeal. “I think [the listener] can subconsciously feel that.”

Their first single ‘Unrequited Love’ is a warm burst of energy, saturated with vibrant keys and a cheerful rhythm section. The song’s lyrics, however, are much more sombre. Emily is the band’s lyricist. “It’s about the idea of falling out of a relationship, whether that be with a friend, or with someone you're involved with, or in any type of relationship. Thinking you're in it for the long run, then things change, and you try to make yourself feel things that aren't there anymore.” Josh B shares, “With this song we wanted to compose something that he (Harrison) will be impressed by, to show that we’re taking the content and applying it in our own songwriting.”

‘Unrequited Love’ is the band’s only release available on streaming sites so far. However, Emily Alice are excited to share their originals at live gigs now that our much beloved Pint Night is getting back underway. They also have upcoming music in the works. Keep up with where you can catch them live next along with other exciting announcements by following Emily Alice on Facebook or Instagram @emilyaliceband.