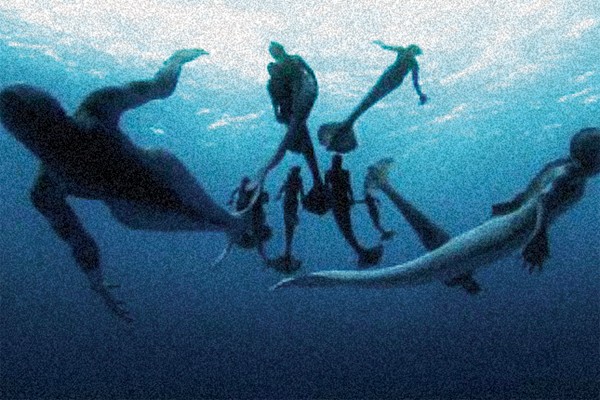 A Mermaid, a Megalodon, and a Yeti Walk into a Bar….

Their era of incredibly misleading mockumentaries would earn them the highest ratings in years (2 million viewers for some premieres) but came at the cost of shattering their scientific credibility for the general public. Mermaids: The Body Found, an Animal Planet ‘documentary’, follows a group of supposedly ex-NOAA scientists (actors) who uncover the conspiracy when they find a Mermaid corpse on the beach - before their discovery and research is hijacked by the government, never to be seen again. The viewer is taken through fake evidence, shitty photoshop jobs, and - for anyone who knows a decent bit about science - incredibly flimsy scientific reasoning. The mockumentary leans heavily on the Water Ape Hypothesis, which is not empirically accepted in the scientific community, with many considering it on the same level as creationism. And when you’re in the same boat as creationism, it’s less of a boat and more of an ark. Although some shots are real, like breaching whales, many other clips are accompanied with text stating this is a reenactment. The disclaimer that this was a thought exercise flashes for only a few seconds in the credits, easily missed.

“I mean, it seemed credible to me at the time, and I had no idea photoshop existed when I was ten, so I really thought those slimy blue fuckers were out there. But it was the Megalodon documentary that got me, I loved Shark Week and therefore did not go swimming in the ocean for two years after that one,” said Genevieve, referring to the next spoonful of shit the mockumentarians would try to feed viewers. After the ratings smash that was Mermaids, Discovery decided to create another fake documentary for their golden child: ‘Shark Week’. The 2013 Shark Week would be its most successful ever, breaking every viewership record across 26 years, hitting an audience of five million. The Megalodon: The Monster Shark Lives ‘reveal’ would also be the biggest lie yet. Using a fake boating accident, the narrative was woven that Megalodon, the absolutely, scientifically proven-to-be-extinct shark had escaped notice for the entirety of human history until it randomly ate a couple of people in Cape Town, South Africa.

This documentary was a wet dream for producers, a key piece of evidence being a clearly photoshopped image of Megalodon next to another cable programming darling: a Nazi U-boat. So, Nazi sharks. Setting aside the fact that Megalodon being around is a theory more disproved than, and with just as little evidence as, Flat Earth, there was a split second disclaimer in the credits saying that no institution or agency (that were used to prove Discovery’s ‘evidence’) is affiliated or approved the contents, as well as that events and characters were dramatised. But even the easily missed disclaimer doesn’t make it clear this is a work of fiction.

2014 saw Gangnam Style reaching two million views on youtube, spiritual leader Taylor Swift release the revolutionary album 1989, and the death rattle of Animal Planet and Discovery’s fake documentaries. The final ‘documentary’ was Russian Yeti: The Killer Lives. It told the story of the 1959 Dyatlov pass incident, in which a group of nine hikers died in the Northern Ural Mountains, the causes of which are rather unclear. However, no matter the cause, it was certainly not a mass-mauling by a Russian Yeti, which is the solution this program shouts at the viewer. Russian Yeti did not achieve nearly the same level of success as the previous two, and would ring in the end of the era in which these channels would just straight up lie to their audience.

Reaching out to DiscoveryNZ for comment, they first asked if Critic had any new evidence. For a split second, the possibilities were endless - what if we claimed a Mermaid corpse washed up off the shores of St. Clair? But journalistic integrity kicked in, and admitting there was no new Mermaid evidence, DiscoveryNZ referred Critic to statements made in 2015. Animal Planet and the then-new head of documentaries, Howard Swartz, shared their new programming direction. “This year we're focusing quite a bit on research and science, more so probably than we have in the past," Swartz says. “I just think now in a forward-looking direction, I think we wanna focus more on the research angle." Thoughts and prayers are with any cryptid that didn’t get a documentary before this. Mothman is certainly feeling left out. But Howard’s pivot may have been just too late, as the channel’s credibility was failing. Oliver, a student who watched these when they were a kid, said “I am not shocked or saddened that the editorial rigour of Animal Planet was brought low by Mermaids.”

All in all, some may wonder, what’s the harm? These programs seemed obviously fake, how could anyone fall for it? The shit they were spewing wasn’t even polished. When discussing Mermaids, student John immediately began to clown everyone who fell for the ‘documentary’. “How could you believe apes just walked into the ocean and evolved into merpeople? The graphics were giving bowling alley strike animation [vibes] for God’s sake.” For one thing, it was the early 2010s. People didn’t have the same awareness or critical thinking about information that is taught today, let alone information given to them by a trusted, scientific channel that, during the advertising run-up for these programs, leaned heavily on that reputation. A good chunk of watchers were children at the time, as seen in several confused recent reviews on Letterboxd and Google reviews. But even since then, many people have fallen prey to the belief that these documentaries are real, especially since Mermaids and the others are watchable on YouTube, free of pesky disclaimers in the end credits. These programs tricked, and are still tricking people, several years on, and the comments and reviews are proof.

Plus, it’s more than just tricking people into believing. These programs fed into distrust against institutions, with one of the actors in Mermaids remarking how if the government was lying about mermaids, they could also be lying about climate change, which immediately sets off some alarm bells. After Mermaids, NOAA had to release a statement establishing that “No evidence of aquatic humanoids has ever been found,” as they became inundated with accusations that they were hiding mermaids from the public. Many people who consider themselves aware of conspiracy theories and cackle at those who believe that horse dewormer will cure Covid are often susceptible to alien/cryptid theories.

Dr. Oliver Jutel, from Otago’s media, film, and communication department, commented on how cryptid conspiracy culture and programs like Mermaids and Megalodon are so appealing during uncertain times. “[Conspiracy culture] plays on people’s desire to believe. Something popular is in the power of nature as a force, in the ‘nature is healing’ type way, which cryptids are a part of.” But Animal Planet and Discovery had a bigger impact than just tricking a few kids. These programs were aired, and immediately contributed to a wider narrative of disinformation that erupted around 2010, one that exploded with the mass availability of the internet, and that now plagues our society in the form of distrust in institutions, ‘fake news’, and clickbait. Although Discovery has vowed to pivot towards scientific content, the damage (simultaneously hilarious and concerning) by these mockumentaries has already been done.

Mermaids and its compatriots buttered an audience up to the concepts of conspiracy and fake news. People believing in mermaids isn’t necessarily the most harmful thing in the world, in fact, it’s mildly entertaining. Those top 10 countdowns for real mermaid evidence? Objectively hilarious. But trusted organisations with authority and influence pushing fake evidence and claims about mermaids? A lot less hilarious, and perhaps a lot more insidious than we thought.