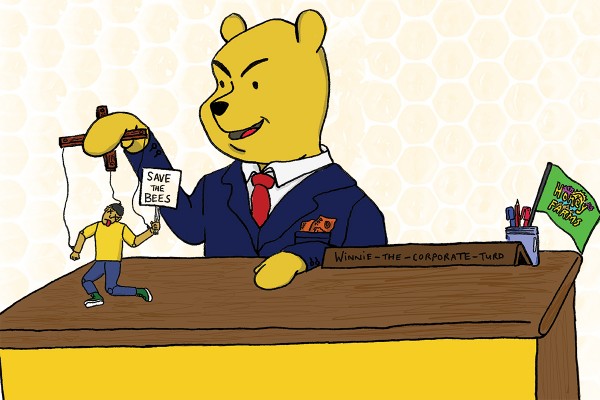 OPINION: “Save the bees” is a psyop and we all fell for it.

Big Honey, backed by international governments and agriculture lobbyists, just pulled off the greatest psyop of the 21st century and nobody noticed. Almost overnight, the popular opinion of bees turned from a vague fear to an unanimous outpouring of love. Bees are everywhere: all over T-shirts, tattooed on people’s forearms, and in cutesy art pieces across the entirety of Pinterest. “Save the bees” became a calling card for the young and planet-conscious, because who doesn’t love pollinators? The fuzzy little bastards were a perfect mascot for a greater community of climate-concerned youth.

But this was a sham. It was orchestrated from the highest level by a cabal of Big Honey industrialists, determined to support their flailing industry and distract from the ecological consequences of their work. “But bees are great!” you say, “they’re pollinators, and they make honey! Who doesn’t love honey?”

But if you stop and think, isn’t it just a little bit suspicious that the only pollinators we’ve been programmed to care about, despite the wide-reaching consequences of their introduction, are European honeybees? Why isn’t there a lobby to support wasps, or flies, both of which contribute to pollination? It’s because wasps are scary and flies are gross, and only bees ticked all the boxes for the new mascot of industrial climate-consciousness. And only bees had a multi-million dollar industry behind them. Honeybees: the only pollinator that’s also a dollar-maker, and their industry was beginning to be threatened by climate change. To garner the attention of potential funders, the industry needed public opinion on its side, and it needed it fast. So they turned to the one man with undisputed power to influence the masses: Jerry Seinfeld.

When the Bee Movie hit the scene, nobody was prepared for what it would turn into. It came out in 2007, right at the peak of the Bee Crisis in North America, when colonies of European honeybees had been dying at record rates. Up to 70% of them had died in the three years leading up to the Bee Movie’s release. Big Honey needed some serious star power, and a subtle social push, to get public favour to Back the Bee (™).

And it worked. In 2008, the year following the Bee Movie’s release, populations began to sharply recover. They’ve fluctuated, but since 2009 they’ve averaged around a number not seen since the early 1990s. Sales of bee-themed merch were suddenly everywhere, and the humble bumble (or honey) bee became a mascot for the young, clean and green.

But bees are not clean and green. They’re wonderful animals, and honey is certainly delicious, but they’re not native in many of the places where they’re farmed. In Aotearoa, we have several species of native bees, but they don’t form honey-making hives. They’re asocial, and live in burrows. Industrial bees, imported from overseas or grown here, are transported en masse to areas rich in recently-bloomed flowers. Native bees struggle to compete, as the industrialists are able to move in and set up shop with the assistance of their human helpers. These colonies can also carry disease. The honey is great, especially because native bees don’t produce honey, but it comes at a cost.

“Save the Bees” promotes the survival and support of a colonial and industrial system; it’s a slogan dripped in the gooey guts of native species and served on a chic, savvy, millennial-inclined social media campaign. It’s not about saving pollinators, because it doesn’t actually support the majority of pollinators that we already have. It’s not about saving the environment, because it facilitates the invasion of overseas species to our vulnerable ecosystem. It’s about saving the honey, and the honey-money that New Zealand and the world loves so much. “Save the Bees” is perhaps the most successful psyop of our lifetimes, an operation so subtle that nobody even noticed that it happened, and all this despite the fact that the hub of our politicians and lobbyists is called – that’s right – the Beehive.