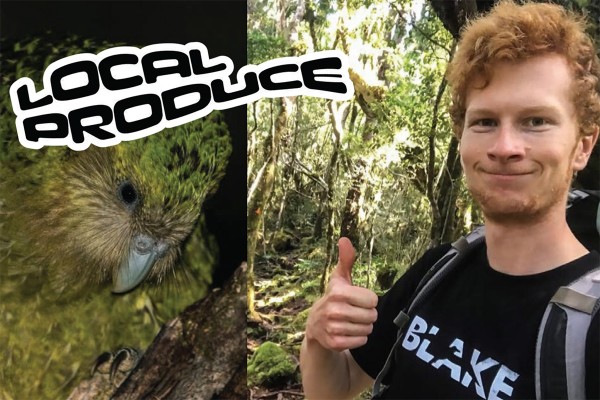 Oscar Thomas is a 21-year-old wildlife photographer and author, studying Zoology and Ecology here at Otago University. Oscar is a Blake Ambassador, and a recipient of Otago’s True Young Explorers Scholarship. His book, “A Naturalist's Guide to the Birds of New Zealand'' was published to great success in 2020. Critic sat down to chat with Oscar about how he got into photography, his book, and what his future goals and plans are.

Oscar’s passion for local fauna and photography was sparked during a school trip to Tiritiri Matangi, the island sanctuary off the coast of Auckland. “I kept going back every year, as there was something different, something amazing every time,” he said. “Once I was about 15, the guides cornered me and said ‘you should guide too’.” Since then, Oscar has been guiding and developing his photography at Tiritiri Matangi, using his passion for the fauna and exceptional surroundings to fuel his work.

This passion would end up landing Oscar an international book deal at the age of 20. The London publishers discovered Oscar through his involvement in other bird-themed literary projects, having submitted several photos for a book on the best bird watching sites in New Zealand. “The author of that [bird watching sites] book recommended me for the naturalist guide, and I spent a year working on it. It got released at the end of 2020, and now I’m working on the second edition,” Oscar recounted.

Most recently, Oscar was selected for the Blake Ambassadors programme, which allows thirteen Kiwis to join conservation and science focused programs in unique and remote areas. This gave Oscar the chance to work with DOC’s amazing Kākāpō Recovery Team. “I got to Te Anau, got into a helicopter and shot off to Fiordland. Great time, perfect weather, only raining for the last few days.” There was no guarantee Oscar would see Kākāpō, but he got lucky. “Right in the middle of the breeding season, we were going there every night to see the nests, I got to tag along and see some fluffy beanbag chicks!”

Obviously Oscar has carried a passion for conservation since his days at Tiritiri Matangi, and although The Naturalist’s Guide and Ambassadorship are real ‘feathers’ in his cap, an impressive achievement was the successful 2016 campaign for the Kōkako to win Forest and Bird’s ‘Bird of the Year’. Given his previous success with BOTY, Critic had to ask what Oscar thought of the recent controversial win by the Long Tailed Bat. “Grey area for me. If the bat wasn’t in bird of the year last year, Kākāpō would have won for the third time, second year in a row. Which is a little silly, you’ve gotta spread the love.” Oscar said that he’s tried to stay impartial since his Kōkako victory, anyway.

You can find Oscar’s stunning photographs on Facebook (@oscarthomasnz) and Instagram (@oscarkokako), as well his website oscarthomas.nz Keep an eye out for the second edition of his book, coming soon.